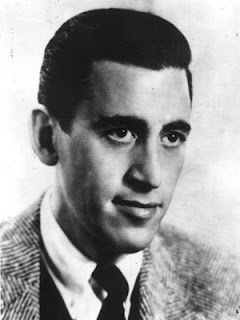 ...and now J.D. Salinger has died??? So many artists who spoke to me at certain points in my life, all dying within a relatively concentrated period of time? Damn...

In the interest of honoring Salinger's distrust of "phonies," I might as well disclose early on that, other than The Catcher in the Rye, I haven't yet read much of Salinger's other work. (I guess I know now what will be next in my reading queue after I finish Farber on Film!) In fact, it was only after his death was announced today that I finally got around to reading his famous short story "A Perfect Day for Bananafish"...and, in addition to being a deeply affecting piece of writing (its ending is as blunt-force stunning as the impact of the bullet that Seymour empties into his brain), it vividly reminded me of what I loved about Catcher when I acquainted myself with it during my high school years.

I like to think that one of my better qualities is that I always try to be honest with people, both in person and online, about the kind of person I am; I think The Catcher in the Rye played a huge part in shaping that quality in me. Also—to be perfectly honest—it spoke profoundly to some of the darker emotions I was feeling during my adolescent years, as someone who always felt rather outside of the loop in many ways, particularly socially. Admittedly, I haven't re-read the book in years, and even after reading "Bananafish" tonight, I do wonder, years removed from those emotionally tumultuous high-school years, if I'd embrace it with nearly the same passion that I did back when I was younger. (In the back of my mind, I wonder if Salinger's vision, casting as it does a gleaming light on the innocence of childhood, has begun to come off as merely sentimental as I wade deeper into adulthood. Or have I really become that cynical? I shudder at the latter notion.) But I won't deny the impact The Catcher in the Rye had on me...and I can't imagine its brilliance simply as a piece of writing has dimmed one iota over the years.

And now, I will end this remembrance here, reserving to right to say more about Salinger once I get to the rest of his work. Nevertheless, I thought this particular loss, and my own personal (if perhaps not wholly well-informed) investment in said loss, was still worth noting here.
Posted by Kenji Fujishima at 1/28/2010 11:00:00 PM

The interesting thing is that his reputation is based on such a small body of work---one novel and a few collections of short stories. The big mystery now is the rumors that he has been writing continually for the last 50 years or so and all that material is collected in a safe at his home. It will be interesting to see if this is true and what, if anything, will be published.

There apparently also seems to be speculation about a Catcher in the Rye film adaptation finally making it to the screen. I'm skeptical about the artistic success of such an endeavor, and not just because Salinger himself actively discouraged it. It'd probably depend on who was helming such a film.