BROOKLYN, N.Y.—Here's a taste of the kind of weird connections the visual side of my brain is wont to make when it comes to the movies.

On Saturday, I took in a double bill of Fritz Lang's Human Desire (1954) and The Big Heat (1953), the first two films being shown in Film Forum's "Fritz Lang in Hollywood" series, in which all of the great Austrian director's Hollywood films are being screened. I had seen neither film previously, by the way; both turned out to be terrific, especially The Big Heat, which still carries a shocking, brutal charge decades later in its pull-no-punches depiction of a whole system of corruption, on both sides of the law. But Human Desire is quite good, too; it's an adaptation of the same Émile Zola novel that Jean Renoir adapted into La Bête Humaine (1938), and in some ways Lang's chilly determinism suits the material better than Renoir's warmer humanism.

Anyway...at one point in Human Desire, there is a shot of Glenn Ford lying on a bed smoking, in a contemplative state of mind: 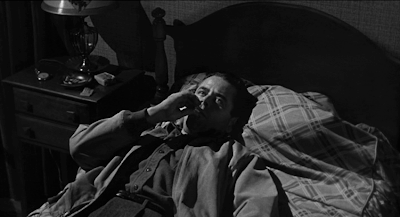 This composition looked rather familiar to me. Then my mind turned to this: 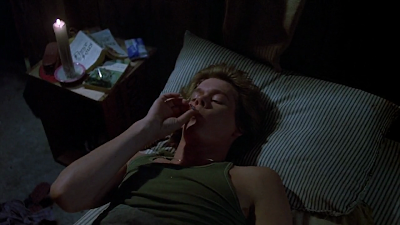 Yes, folks, that is Kevin Bacon from the original Friday the 13th (1980), enjoying a post-coital cigarette, completely unaware of the arrow he's about to get through his throat. Doesn't the mise-en-scène in that shot seem at least somewhat similar to that shot of Ford on the bed in Human Desire? Was Sean S. Cunningham possibly paying tribute to Lang with that shot?