CHAMPAIGN, ILL.—Sorry for the lack of posting in the past couple weeks or so on this blog. This time, though, I have two good excuses, I think: Tribeca Film Festival and Ebertfest!

For Tribeca, I contributed to Slant Magazine a few reviews of films playing at this year's edition of the Robert De Niro-founded festival. And when I say Slant Magazine this time around, I mean the actual Slant Magazine, not its side blog The House Next Door. So now I have reviews for that site with star ratings and everything! Despite its reputation as a wildly uneven and inconsistent festival in regards to quality of films shown, the bulk of the handful of films I saw at Tribeca this year were actually pretty good, or at least reasonably interesting. I'm happy that one of the films I reviewed, Rwandan director Kivu Ruhorahoza's uneven but intriguing Grey Matter, picked up a couple of awards at the festival, one for lead actress Shami Bizimana and another for Ruhorahoza himself.

Here is a list of all the Tribeca films I reviewed for Slant:
Black Butterflies
Cairo Exit
Grey Matter
Janie Jones
Jiro Dreams of Sushi
The Journals of Musan

And here is a link for Slant Magazine's full Tribeca Film Festival coverage.

I wasn't able to cover more of Tribeca, however...because, at about the halfway mark, I found myself here in Champaign, Ill., for the 13th year of Roger Ebert's Film Festival, or what is more commonly known as Ebertfest!

Thirteen films hand-picked by the legendary film critic himself, screened in the span of four days at the historic Virginia Theatre in this small Illinois town (his hometown, apparently), plus a couple of panels and one epic night of karaoke—all of this contributed to taking away precious time to blog about the experience. So obviously, I'll have much more to say about Ebertfest in one or two future posts (short version: it was a lot of fun, if oddly more exhausting, in less days, than South by Southwest).

Until then, though...chew on this: 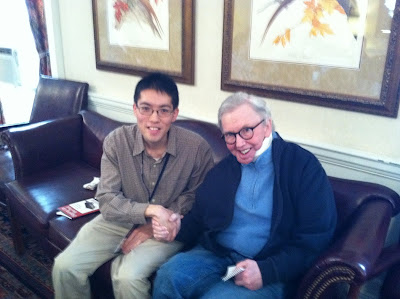 Email ThisBlogThis!Share to TwitterShare to FacebookShare to Pinterest
Labels: Ebertfest 2011, linkage, photos with me in it, star sightings, Tribeca Film Festival 2011

I did. More details, and photos, to come!

Wow! You did say you saw him, but I did not know you actually spoke with him and hung out! Looks like it was a very very cool time.

Indeed! Yeah, at a couple of moments during my stay there, I actually was in the same room with Ebert outside of the screenings at the Virginia Theatre. I did speak with him briefly, though what I said to him probably didn't make a huge impression...but he was nevertheless gracious in his manner, as he often is.

Just wanted to say that I read your review of "Grey Matter" on Slant and found it very thorough and well-written! And that's so cool that you got a pic with Ebert :)