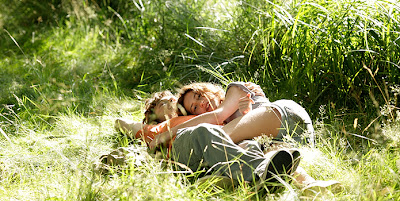 My latest New York Film Festival dispatch couples together two films I saw at Toronto International Film Festival: Sean Durkin's tense debut feature Martha Marcy May Marlene and Mia Hansen-Løve's warm and wise third film Goodbye First Love. At first, the only reason I decided to bunch these two together was because I had previously seen them in Toronto; as I started writing this piece, however, I realized that there are some other similarities connecting them—most notably, the fact that both films feature young female heroines under duress, whether extreme in the case of the former or universal in the case of the latter. Similar or not, both are very much worth seeing.

(Both of them have theatrical distribution, by the way, so you won't have to pay, like, $24 to see them in upcoming public screenings. But, hey, far be it from me to discourage you from giving money over to the Film Society of Lincoln Center and their New York Film Festival! Without them, I wouldn't be keeping busy right now and keeping my mind off my stagnant professional career and all that!)
Posted by Kenji Fujishima at 10/12/2011 08:00:00 AM