BROOKLYN, N.Y.—As you will all surely notice below, this week's artistic consumption log has no films listed. I did watch seven-and-a-half additional hours of Christian Marclay's The Clock, but being that I only list works of art I have fully consumed, I have left that off this list (besides, I'll have more to say about it in a separate post).

Otherwise...this was a week of two major derelictions of cinephile duties. On Thursday night, for instance, I had psyched myself up to finally see Jacques Demy's The Young Girls of Rochefort (1967) at Walter Reade Theater as part of its (now-over) Gene Kelly retrospective—but then, as I started hearing more about this supposed "super storm" that was coming up the East Coast, and then seeing the darkness that began engulfing midtown Manhattan at around 7 p.m., I decided, at the last minute, to play it safe and just go right home after work. Imagine my displeasure when this "derecho," as this weather event was officially called, turned out to be yet another overhyped weather event on a par with last year's Hurricane Irene (at least as it manifested itself—barely—in New York). Regrets: I've had a few.

And this past weekend, the Museum of the Moving Image, as part of its ongoing "See It Big!" series, screened a rare 35mm IB Technicolor print of Alfred Hitchcock's Vertigo—in other words, a print that, from what I hear, offers a stark contrast to the still much-disputed color and soundtrack manipulations of the 1996 Robert Harris-led restoration that's still making the repertory-cinema rounds. Alas, I already had tickets to a modern Chinese opera (of which more below) on Saturday night, and I had work on Sunday, so I wasn't able to see this vintage print of one of my favorite films of all time. (Maybe I dodged a bullet? I kept hearing about focus issues at Saturday's screening, at least.)

One of these days, I'll finally get back on the repertory-cinema wagon, one which I feel I've been neglecting for a while now thanks to writing commitments, other film festivals and such. Maybe this week? 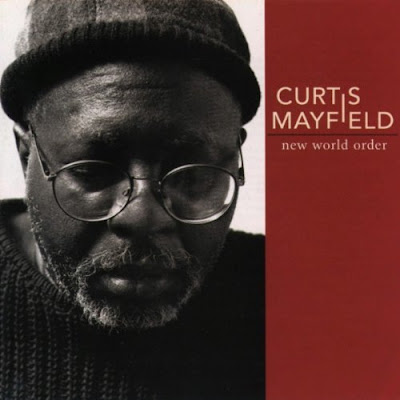 ★ New World Order (1996, Curtis Mayfield)
That Friday, July 20, Curtis Mayfield 70th-birthday tribute show at Avery Fisher Hall that I wrote about here was titled "Here But I'm Gone," which takes the name from a song of his—but not a song written during his 1960s/'70s glory days. No, "Here But I'm Gone" is a track from New World Order, his final album, and the first record he cut after the stage accident that left him paralyzed in 1990. As a result of his paralysis, he was forced to record the songs by sitting on his back and singing them one line at the time; his singing was later edited together.

Among his post-Impressions solo work, New World Order won't efface memories of his self-titled 1970 debut album Curtis or, arguably even more so, his Superfly soundtrack (1972) as far as consistency goes; and lyrically speaking, New World Order showcases Mayfield at his most direct and flatly declarative, without the metaphorical overtones that distinguish his best songwriting. That, however, doesn't stop this from being a touching collection of songs, however: an uplifting document of an artist who seems to be celebrating the mere fact that he's alive, and trying to express all the wisdom he's gained since losing some of his physical powers. As far as final artistic statements go, this is a pretty good one from one of the greatest songwriters of American pop music.

Morning Better Last! (2003, The Dirty Projectors)
Slaves' Graves & Ballads (2004, The Dirty Projectors)
★ The Getty Address (2005, Dirty Projectors)
I decided to make the music of indie band Dirty Projectors my next listening project, thinking that I'd only have to deal with one album, Bitte Orca (2009), before hearing their latest, Swing Low Magellan. But no, apparently David Longstreth & co. have a few albums before Bitte Orca to their credit. So, near-completist that I am, I decided to go back to the earliest Dirty Projectors that's available on Spotify, at least: Morning Better Last!, an album of short, distinctively lo-fi tunes—culled from three tapes Longstreth made in 2001 and 2002—that seem to add up to a song cycle about life in Los Angeles, at least from what I can gather from Longstreth's elusive lyrics. It has a certain charm to it—more charm, to my mind, than the overly precious and affected first half of the subsequent Slaves' Graves & Ballads (the second half returns to the acoustic vibe of Morning Better Last!, but with far better production values).

The Getty Address is my favorite of the Dirty Projectors albums I've heard so far, though not necessarily because of its content, whatever that is (supposedly it's a song cycle about, of all people, singer/songwriter/former Eagles frontman Don Henley, among other topics of interest). Mostly, I find it compelling as a procession of fascinating, genuinely original sounds, both orchestral, electronic and both at the same time. I guess I just warm to these unabashedly experimental tunes more than I did to anything in the first half of Slaves' Graves & Ballads, even if the styles are basically similar.

Basically, I'm still waiting to be fully blown away by this band. Maybe I'll need to wait until Bitte Orca—the one everyone seems to know about—for my breakthrough?

★ Uncle Vanya (1897, Anton Chekhov), performed live at New York City Center in New York
I splurged on a ticket to this Lincoln Center Festival-hosted Sydney Theatre Company production of Anton Chekhov's famous play mostly on the basis of some of the talent involved: Cate Blanchett playing Yelena, the caring but bored wife of the much older retired Professor Serebryakov (John Bell); Hugo Weaving—whom most American audiences would probably know as the villainous Agent Smith in the Matrix films—as environmentally conscious Doctor Astrov; and Jacki Weaver—a recent Oscar nominee for her performance as a subtly evil matriarch in Animal Kingdom (2010)—as a nurse named Marina. Not that seeing Chekhov performed live wasn't a draw as well; honestly, I've never seen Chekhov live, much less this play.

My snap reaction to Uncle Vanya: It's indubitably great, but boy is it bleak. Not that it's just a slab of relentless miserablism, mind you; Uncle Vanya often has a streak of pitch-black humor to it—a side that this exemplary production especially brought out—that leavens the depressiveness. But man, that last line Sonya repeats at the very end: "We will rest"? Well, I mean, maybe you might find some hope in the idea that, for these characters stuck in various forms of limbo (much of it self-imposed), death is the only thing they have left to look forward to in their lives. That ain't my idea of uplift, personally. Chekhov's trump card is how clear-eyed he is about the causes of the unhappiness of these characters: Vanya's resentfulness toward Serebryakov, a man he once idolized; Yelena's fear of busting certain societal taboos despite her natural passionate vitality; and Vanya's sister Sonya's shyness when it comes to expressing her love for Astrov, a love that Astrov doesn't requite. As with many of the greatest tragedies, Uncle Vanya—especially done in as exemplary a production as this one, with a terrific Richard Roxburgh in the title role—manages to be cathartic rather than merely depressing; there's enough authentic life and emotional variety to it that it adds up to a genuinely humane and soulful experience.

★ Feng Yi Ting (2004, Guo Wenjing), performed live at Gerald W. Lynch Theater at John Jay College in New York
This is yet another Lincoln Center Festival event that I attended this past weekend. Two things made me curious about this: 1) the fact that this was a Chinese opera, which of course naturally piqued the interest of my half-Chinese self (how many of those get performed here in New York in the Upper West Side?), and 2) the fact that this production was directed by Atom Egoyan, who most of you may know as the director of films like Exotica, The Sweet Hereafter and, more recently, Chloe.

Guo Wenjing's opera is the umpteenth work based on the famous Chinese novel Romance of the Three Kingdoms (just earlier this month, I saw a film with Donnie Yen in it called The Lost Bladesman that had that classic novel as its basis; and, of course, there's John Woo's Red Cliff). I won't burden you all trying to explain the complicated backstory of Feng Yi Ting; basically, it centers around the attempts by Diao Chan—considered one of the most beautiful women in all of ancient China—to seduce both the warlord Dong Zhou and his godson, General Lü Bu, and essentially pit them against each other in a way that will ultimately help bring about a united China.

Feng Yi Ting, however, isn't a lavish costume epic. Well, I mean, it's still fairly lavish-looking in Atom Egoyan's production...but as human drama, it strips the story down to just Diao Chan (acted/sung by Shen Tiemei) and Lü Bu (acted/sung by Jiang Qihu). Neither of them are seen onstage interacting with each other all that much; instead, we hear their internal monologues, sung in the usual pinched-sounding manner of traditional Chinese operas. For Diao Chan's part, she mostly extols the virtues of working for a cause larger than herself—but through Lü Bu's anguished arias, we see the emotional effect Diao's machinations have on him.

The way Feng Yi Ting tells this tale, however, is what interests me the most about it. Everything is done in a detached, ceremonial manner; the singers themselves are often asked to move about the stage in the glacial manner recalling pieces on a chessboard. Guo Wenjing's score buttresses this rather alienating feeling: It's a clash of very Chinese period sonorities (traditional Chinese instruments such as the pipa, dizi and erhu are included in the orchestration) and a fairly atonal modern style. The cumulative effect of reminds me, in some ways, of the effect of watching Stanley Kubrick's historical drama Barry Lyndon: the disquieting feeling of seeing a human drama playing out at a historical remove. The style, however, is appropriate for a drama that pits Diao Chan's chilly, calculating reason against Lü Bu's increasingly anguished, hotheaded emotion. For his part, Atom Egoyan chooses inventive multimedia visual representations of this head-versus-heart conflict—even going so far as to play around with the projected Chinese/English supertitles and having them break apart into a swirling sea of characters/letters during the moments where Lü Bu expresses his innermost anguish.

Oh, and did I mention that all of this is a mere 43 minutes long? Yes, it's less than an hour! (Even Kaija Saariaho managed to stretch the life story of Émilie du Châtelet to more than an hour in that monodrama of hers I saw in this same space the week before!) Ultimately, though, I think the concision works for this narrowly focused approach to a larger story; if anything, Feng Yi Ting might have had much less of a lingering effect if it had been stretched inordinately to epic length.

So, for all those on Twitter who expressed a genuine interest in reading me talk about a Chinese opera that I saw on Saturday night—well, you've just read it, and I haven't bored the rest of my Twitter followers with something I suspect most of them aren't interested in. This is what blogs are good for!
Posted by Kenji Fujishima at 7/30/2012 02:15:00 PM