"Summer of '87": Looking Back at Predator 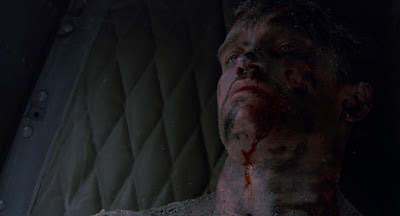 For the past few years, The House Next Door has co-presented a "Summer of..." series with Aaron Aradillas, Jamey DuVall and Jerry Dennis of the Blog Talk Radio podcast Movie Geeks United!, publishing a series of retrospective posts tackling films released during a summer 25 years before the current one. Thus, this being 2012, House contributors are writing about films released during the summer of 1987 in this year's installment. So far, the blog has put up posts on Ishtar, Creepshow 2 and a previously-unknown-to-me Irish comedy called Eat the Peach.

Now we come to my first contribution to this "Summer of '87" series: Predator—yes, John McTiernan's sci-fi/action jungle epic with Arnold Schwarzenegger and a bunch of other soon-to-be-crushed specimens of viriles homines. I might not go so far as to call this a genre masterpiece (after all, McTiernan's Die Hard was only a year away)...but I think it's a far more interesting and even somewhat subversive picture than many have given it credit for being. It also has one of the greatest final showdowns in the history of cinema, one that continues to thrill even after 25 years. The titular alien may be one ugly motherfucker, but the movie itself is, more often than not, a beaut.

Anyway, I pool my many thoughts on the film here. Enjoy! (As to what my second contribution will be...well, those of you who follow my artistic consumption logs closely may have an idea what it is by now.)
Posted by Kenji Fujishima at 7/18/2012 09:00:00 AM

Email ThisBlogThis!Share to TwitterShare to FacebookShare to Pinterest
Labels: John McTiernan, self-promotion, The House Next Door