BROOKLYN, N.Y.—I may have just set a record for tardiness with an artistic consumption log by posting this today, Wednesday, two days later than usual. For the handful of you who have been waiting for this with baited breath, my apologies.

★ Flight (2012, Robert Zemeckis)
This last week of New York Film Festival screenings was full of surprises. I mean, I expected great things from Léos Carax's Holy Motors and, as I expressed in this House Next Door review, found my expectations generally met.

The three other films, though, blindsided me. Ginger & Rosa, for instance, seemed to garner a fairly respectful but not ecstatic response at Toronto last month, so I didn't expect a whole lot going in; Sally Potter's latest film turned out to be arguably the best of NYFF's Main Slate trio of '60s period pieces (the others being Olivier Assayas's Something in the Air and David Chase's Not Fade Away): a film of intelligent nuances, subtle visual beauties and a welcome lack of nostalgia. As for No: I wasn't a big fan of either of Chilean filmmaker Pablo Larraín's previous two films, Tony Manero (2008) and Post Mortem (2010), but in his new film he drops the facile metaphors of its predecessors and goes directly for the jugular when it comes to depicting the process of, essentially, adopting the language of advertising to sell a revolution. It's less successful at human interest: Larraín's interest in René's (Gael García Bernal) home life mostly feels obligatory at best (though the warmth, however ironic, in those domestic scenes a relief after the perversities in Tony Manero and Post Mortem), but as a chronicle of process, it's engrossing. And yes, I would defend Larraín's visual perversity in shooting his new film on a Sony U-matic VHS tape, which matches the format in which the various political television commercials were shot, and which, though not always easy on the eyes, does have the effect of blurring (literally, in a sense) the line between TV and "reality" in a way that I find genuinely provocative in this context.

But Robert Zemeckis's Flight offered perhaps the biggest surprise of them all. I walked into it with no expectations whatsoever, and it didn't seem, among many colleagues I've spoken to, that there was necessarily a whole lot of excitement about Zemeckis's return to live-action filmmaking after a few years spent in a motion-capture wilderness with his last three films (The Polar Express, Beowulf and A Christmas Carol). All I knew was that it had something to do with a drunk pilot who somehow managed to land a plane. I thought that was the whole movie; I didn't think that that would only be, maybe, a third of the film and that the rest would focus on an alcholic's bumpy road to—well, some kind of recovery, at least. Flight turned out to be a surprisingly powerful experience, and it has one of Denzel Washington's finest performances, a terribly watchable spectacle of raw nerves and volatile self-loathing. This is the kind of film in which its character study is as tense as its obviously showstopping airplane-crash setpiece early on in the film—a Bruised Forearm movie of a far more inward, character-based sort. It ended this year's New York Film Festival on a strong note, as far as I'm concerned.

The Spy Who Loved Me (1977, Lewis Gilbert), seen at Museum of Modern Art in New York [second viewing]
I suspect many of you are asking the following two questions as to what this title is doing in this log: 1) Why is a James Bond film playing at the Museum of Modern Art, of all places?; and 2) Why did I decide to see this one again, out of all the Bond films I haven't even seen (and my Bond blind spots are legion, starting with the Connerys—yes, all of them)? The answer to the first question is easy enough, answerable by this link. As for Question No. 2...well..."curiosity" is my only answer, really: to see how a film I had seen on television as a teenager held up for this older and supposedly wiser cinephile now.

I had forgotten how much The Spy Who Loved Me plays as romantic comedy, especially in its first hour, with Barbara Bach's rival Russian female secret agent offering genuine competition to 007. And only now was I able to fully appreciate the visual pleasures offered by Claude Renoir's cinematography—never more impressive as in the Egypt sequences early on in the film—and Ken Adam's production design. Overall, it's still pretty enjoyable, and Richard Kiel's silver-toothed henchman Jaws remains as memorably goofy a villain as ever. I have to admit, though, that, in light of the throwaway manner in which Christopher Wood and Richard Maibaum's screenplay ultimately resolves the emotional thread regarding Agent XXX's vow to avenge her former lover's death by killing 007, the whole thing does seem a bit...well, inconsequential in ways that led me to find the movie more or less dissolving from my memory the instant I left the theater. This is considered one of the best Bond films ever, huh? Well, okay, sure, it's entertaining...but it's sure no Casino Royale (the Martin Campbell one with Daniel Craig, natch).

★ Looper (2012, Rian Johnson), seen at Regal Union Square Stadium 14 in New York
Maybe, in the end, it doesn't necessarily matter that the futuristic world Rian Johnson creates for this new film of his is basically little more than an amalgamation of off-the-shelf parts from renowned sci-fi predecessors (Blade Runner and RoboCop came immediately to my mind). The time-travel aspects are merely a framework for him on which to hang his more character-based, dramatic concerns—and it is on that level that Looper intrigues the most. This is basically a noir with sci-fi trappings: a narrative of a self-absorbed protagonist—or rather, in this case, two self-absorbed protagonists who are actually the same character, one 30 years older than the other—who gradually gains an awareness of a world outside his own immediate, narrow-minded purview. (This, by the way, was also a thematic thread running through another Joseph Gordon-Levitt-led film a couple of months ago, Premium Rush. Come to think of it, Wilee the delivery biker isn't all that different from Joe the looper: both extremely focused and fairly unreflective until they find themselves forced to actually consider and possibly act on behalf of others. It's almost Casablanca-like in that way, really.) When you have one of the main characters killing kids and staging a whole massacre just for the sake of keeping his own (future) wife alive despite the much larger threat of an imminent apocalypse...well, that's pretty risky material right there, offering a challenging critique of self-interest and indifference to the wider world around them. If none of this ever really transcends intellectual intrigue to my mind...well hey, intellectual engagement is certainly better than nothing, right?


★ Lola (1961, Jacques Demy), seen at Museum of Modern Art in New York
★ Brief Encounter (1945, David Lean), seen at Film Forum in New York
This past weekend in moviegoing turned out to have something of a romantic tinge to it thanks to these two classics, both of which I encountered for the first time.

After seeing Brief Encounter, I couldn't help but wonder if Jacques Demy didn't have David Lean's film partly in mind when conceiving Lola (his debut feature)? On the level of plot, granted, these are two fairly different films, Lola's multi-character mosaic contrasting with the two-character simplicity of Brief Encounter. But the two adulterous lovers in Brief Encounter find their dreams of happiness together dashed by the mores of bourgeois society, while many of Demy's characters find their own personal dreams of happiness hindered by the quotidian difficulties of their own daily lives. Spiritually, at least, these two films could not be closer together. And on a more detail-oriented note: In Lean's film, Dr. Alec Harvey (Trevor Howard) ends up walking away from his affair to travel to Johannesburg for an indefinitely period of time, while in Demy's film, Roland (Marc Michel) ends up walking away from his great love Lola/Cécile (Anouk Aimée) to travel to Johannesburg as well. Surely, that isn't just coincidence!

I loved both of these films, by the way—especially Lola in the magical way Demy fuses his love of Hollywood fantasy with a sober awareness of the real world to produce a vibrant vision of life that refuses to deny his dreamers their dreams while recognizing the painful nuances underneath them. And...Anouk Aimée! I had no idea how disarming she could be based on 8½, in which she played an angrier character constantly at odds with Marcello Mastroianni's philandering Guido—but, seeing her talk enthusiastically about keeping her hopes of seeing her former lover alive even with the odds overwhelmingly against her, you can see why Roland would keep his own flame of love for her alive in his heart. I mean, who wouldn't? 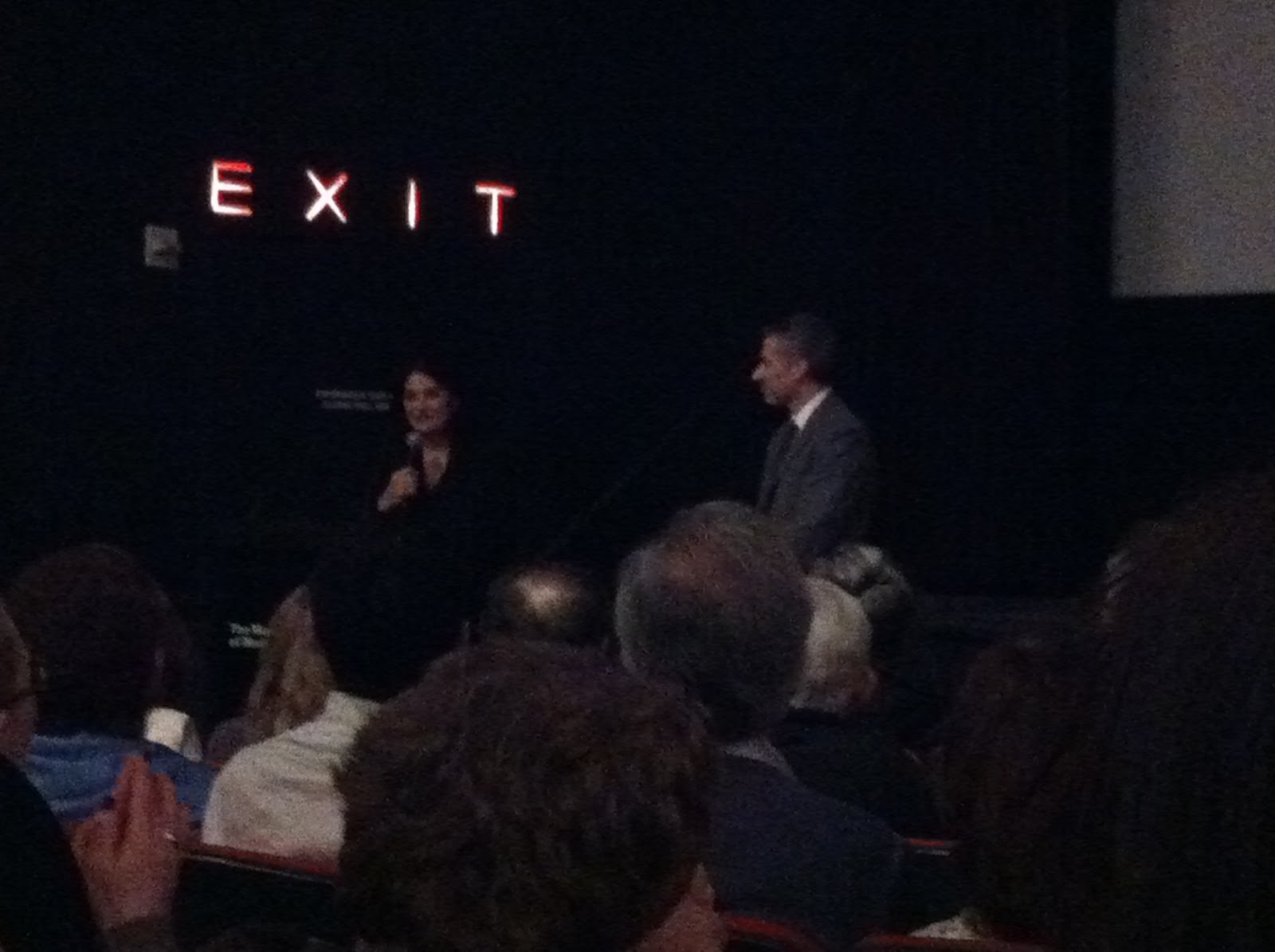 Diluvia (2012, Freelance Whales)
Once again, full disclosure: I'm kinda/sorta friends with the drummer of this band, and I'm happy for the success he's experiencing with this hot indie band. If I'm a bit less enthusiastic about their second album as I was about their first, Weathervanes, it's this sense that, as their sound gets bigger and more ambitious, it becomes even more evident than before just how derivative they always were. And, for me, their marked shift in emphasis on evocative soundscapes rather than hook-driven songwriting makes Diluvia, as a whole, sound as pretty as ever but also shapelessly amorphous and verging on whimsy overload, to my ears. Maybe it's fitting that its one immediately memorable cut, the quick-tempo rocker "Spitting Image," is the one that most recalls their debut (the "oh oh oh oh"'s recalling their opening salvo in Weathervanes's "Generator ^ First Floor"). Still, hats off to them for trying something new in their sophomore effort; I look forward to hearing what they do in their next album.
Posted by Kenji Fujishima at 10/17/2012 08:30:00 AM