BROOKLYN, N.Y.—I took in some truly lovely things this past week. Some of it was even profoundly moving.


The 50th New York Film Festival, all films seen in New York:
Caesar Must Die (2012, Paolo & Vittorio Taviani), seen at Walter Reade Theater
Life of Pi (2012, Ang Lee), seen at Walter Reade Theater
★ Leviathan (2012, Lucien Castaing-Taylor & Véréna Paravel), seen at Walter Reade Theater
★ Liebelei (1933, Max Ophüls), seen at Francesca Beale Theater
Though Friday night was technically the opening night of this year's New York Film Festival, press & industry screenings have been going on for the past two weeks now. This past week's highlight? Well, for me it was clearly Max Ophüls's wise, gorgeous and beautifully felt Liebelei. But putting that sidebar screening aside for now, of the Main Slate titles I saw last week, the best of them was Leviathan, a confrontational, formally stunning documentary that takes a mostly wordless, impressionistic approach to depicting the harsh realities of fishing on the high seas. Long take after long take astounds simply on the level of "how did the filmmakers get such footage?," while the rampant noise of the digital-video footage actually adds to the film's brutal beauty. As much a work of avant-garde abstract expressionism as it is an unconventional "issue" documentary, Leviathan adds up to a sobering vision of fishing as a kind of Hell on earth. If, while watching some of its more horrific images (the filmmakers are not shy about thrusting images of dead or carved-up fish into our faces), I sometimes wondered if the film's aesthetic virtues ultimately overwhelmed the human...well, on the other hand, sometimes there's something to be said for such a take-no-prisoners approach to raising awareness.

Liebelei is indeed easier to love...but of course it is. That swoon-worthy yet wise sensibility of later films like Letter from an Unknown Woman and The Earrings of Madame De... didn't come out of nowhere, as this early German film of his attests. Within the confines of an Arthur Schnitzler-based love roundelay (Schnitzler being a writer he'd return to in 1950 for La Ronde), Ophüls, through his usual elegant long takes and roving camera, meditates on not only the mysteries of love, but also the absurdities of established social orders (military ones, in this particular case) and the dangers of the past coming back to haunt the present. In short, Liebelei has a sneaky profundity to along with its surface romanticism—and boy, how beautiful those surfaces can be! A ride through a winter wonderland while two main characters talk about the concept of "eternity" is a particular highlight (that sequence itself could last an eternity and I wouldn't mind!). Such deep feeling, such rapturous heights, such devastating tragedies—in other words, just another Max Ophüls masterpiece. 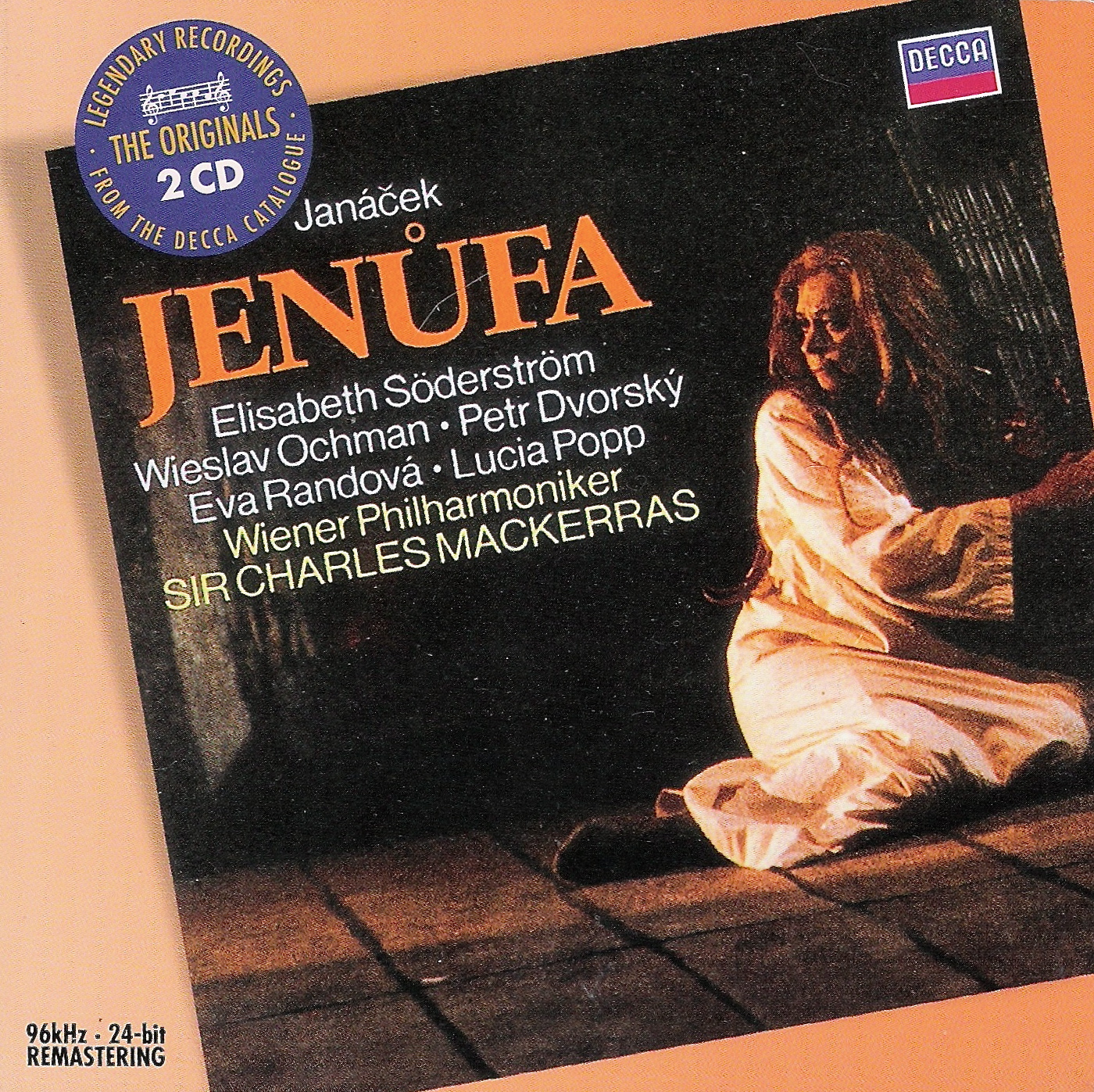 ★ Elysium (2012, Pet Shop Boys)
The glory days of "West End Girls," "What Have I Done to Deserve This?," "Left To My Own Devices" and so on seem long ago—which is not to say the duo of Neil Tennant and Chris Lowe that make up Pet Shop Boys haven't still been churning out good music. Elysium is, I would say, their best album since Release (2002), but what makes this new one special is that there is a tone of personal reflection to it—especially regarding their professional careers as musical entertainers—that makes the whole thing unexpectedly moving in addition to being as witty and catchy as they usually are at their best. Really, you don't have to look any further than its second cut, the evocative "Invisible," to take the temperature of this album in general: mostly midtempo, lush, full of solemn undercurrents.

★ Janáček: Jenůfa (1983, Elisabeth Söderström, Wieslav Ochman, Petr Dvorský, Eva Randová, Lucia Popp, et. al./Vienna Philharmonic/Sir Charles Mackerras)
Back to film critic Robin Wood's favorite modern composer, the Czech Leoš Janáček—and could Jenůfa be my favorite opera of his yet? All three of the operas of his I've heard—this, The Cunning Little Vixen and The Makropulos Case—featured climactic apotheoses of varying sorts, but this is the only one that features a character that's basically elevated to a kind of sainthood at the end of it. How is it that the poor village girl Jenůfa finds it in her heart to forgive her family members for even some of their most brutal transgressions against her, including, of all things, infanticide? What at first seems like foolish naïveté on Jenůfa's part in the first two acts suddenly becomes a powerful force in the closing moments of the final act, inspiring her transgressors to redeem themselves and do good. A grim story of working-class squalor and violence transforms into a transcendent ode to the power of human empathy. Boy, I am now dying to see opera performed live on a stage someday (soon, I hope)! 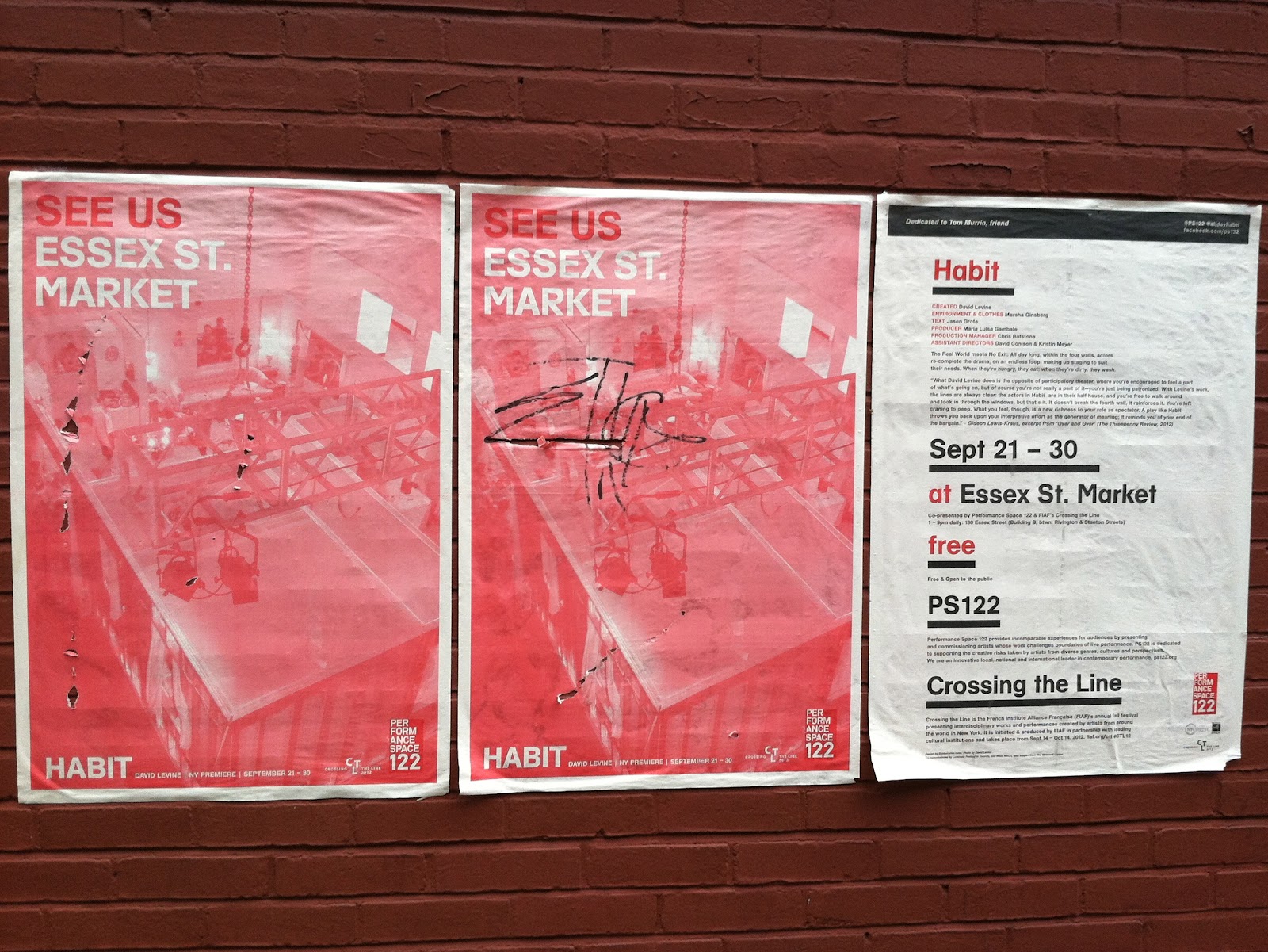 ★ Habit (2012, David Levine), seen at Essex Street Market in New York
Picture this: three actors in a three-dimensional set that resembles the first floor of a house basically acting out the same 90-minute drama on a loop throughout an eight-hour performance during a given day. The words that come out of the actors names are the same, but the actors' blocking and movements vary in each loop, and even the ending can change depending upon the whims of the actors in the moment. As for us in the audience, we are allowed to walk around outside the set and peer into various windows, but we aren't allowed to actually step onto the set and interact with the performers.

That is, in a nutshell, the concept that drives David Levine's theater/performance-art hybrid Habit, the latest experimental, experiential theater piece in the recent mold of Emursive's Sleep No More and Elevator Repair Service's Shuffle. For the spectator, we're given the freedom of roaming around the set, following different characters through the windows and just generally acting like Big Brother-style voyeurs in the unfolding drama of three loser douchebags prodding, goading and revealing awful secrets to each other. But Habit is as much an adventure for the actors as for the spectators: When they're reciting the same lines over and over again and have considerable flexibility as to how those lines are delivered, it's inevitable that each time they go through a loop, they'll uncover different shades and nuances to their lines and characters. If anything, for audience members, it's actually worth sticking around for more than one iteration of the 90-minute mini-drama itself, just to see what interpretive surprises in that regard the actors come up with next. (On Saturday, I stayed for three rounds of what is admittedly a pretty mediocre play in and of itself.)

My legs might have been tired as all get-out after standing on my feet for approximately three-and-a-half hours wandering about the set at Essex Street Market, but, as with Sleep No More, I left the space humming with the thrill of having the boundaries of theatrical performance expand right before my very eyes. (Its two-week run, alas, ended yesterday.)
Posted by Kenji Fujishima at 10/01/2012 08:00:00 AM