Adventures in Filmmaking: Is God—or The Auteur—Really in the Details?

There's not much new to report on the filmmaking front other than the fact that I started working on the script on-and-off last week—and I'm glad I wrote out a treatment before jumping into writing the script, because having a screen story right in front of you, I discovered, really helps you focus while writing a screenplay. I've already written one major scene and a couple of smaller establishing ones, and it only took me a couple of hours to accomplish. If I hadn't planned it out beforehand, I might have spent a lot more time as I tried to figure things out on the fly.

Another thing that has cut down on scriptwriting time? Getting used to the realization that, in a script, you're not directing the film...yet. I started out this project not only with a story idea, but also with images in my head and possible camera angles mapped out; in other words, I embarked on this venture with the hope that I would eventually get to direct it myself. But, as both online screenwriting guides and a friend who is currently working on a script of his own have advised, when it comes to the script itself, it's best to try to take a hands-off approach and not overwhelm the script with detailed camera and actor directions. Eventually, whether you're directing or not, you'll be working with a group of collaborators that may well trump whatever ideas you may have initially had for, say, casting, shot selection or line readings. So it's good for a script to provide that kind of room for interpretation.

That's a bit of a relief for me; it means there is a lot of detail I can leave out for now, and thus less words to put on paper. But it also helps me realize that, as much as some critics might like to romanticize the auteur theory—roughly speaking, the idea that a director's vision and personality will come out no matter the cinematic context—the filmmaking process itself is as much about the people a director works with, and their dueling egos, as it is about the director him- or herself. And I think that I, by nature, am all about inclusiveness and hearing other people's ideas.

I still hope to direct this short film myself...but if/when I do, I will certainly be exploring and collaborating as much as I am trying to put a personal vision on the screen. Adventures indeed! 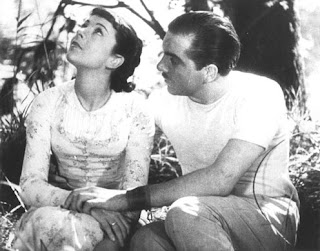 Speaking of a sense of discovery: Who knew that Jean Renoir had already staked out emotional territory that I was interested in exploring in my short film?
On Saturday night, I went to Brooklyn Academy of Music to catch a double feature of the legendary French filmmaker's 40-minute 1936 short A Day in the Country and his 1932 classic feature Boudu Saved from Drowning. I had seen neither film before, but I was especially stoked for the former film, which I had heard much great things about, but which isn't available on Region 1 DVD (though it is available on a Region 2 disc from BFI). Both turned out to be as terrific as I had heard, but I was especially stunned by the tantalizing final moments of A Day in the Country, which, in its deeply felt evocation of missed opportunity and regret—coming as it does at the end of a film that celebrates the pastoral, Pierre-Auguste Renoir-inspired beauty and sense of freedom offered by the countryside—very much reflects the kind of rueful mood I'm hoping to capture with my short film.
In my more angst-ridden younger days, I might have been disappointed by this discovery the way, say, the main character in this weekend's major new theatrical release Kick-Ass feels devastated by the sense of inferiority he experiences in witnessing Hit Girl's ruthless demolition of bad guys. (Wait, Renoir already did this? Why bother doing it myself then, if it's already been done?) But I guess you could say I'm older, wiser (?) and just generally more tired of feeling inferior about everything the way I used to. As a therapist I used to see during a stretch of time in my undergrad years told me: There will always be people better than you at even the things you're most passionate about. Better to find inspiration from your betters rather than merely regretting the fact that you're not on their level.
In that sense, then, I'd say: For that, at least, thank you, Jean Renoir, for making A Day in the Country. Perhaps you and your sublime little film have inspired me to raise my own game in some way.

I will have more to say, by the way, about Boudu and Kick-Ass in a future post (especially the latter, which I think is a good try at a smart genre deconstruction, if not quite as smart as it thinks it is).
Posted by Kenji Fujishima at 4/19/2010 12:01:00 AM