Dark Nights of the Seoul

EAST BRUNSWICK, N.J.—Some more film-review catch-up today. First up: Does South Korean director Bong Joon-ho's portrait of an extremely overprotective mother compare at all with my own mother's brand of overprotectiveness? 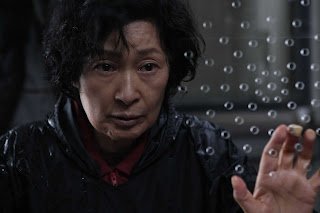 The answer, thankfully, is not really. But then, after seeing this film and his previous film, the monster-movie-cum-family-drama The Host (2006), I may be on the verge of giving up on being able to find much real-life resonance in any of Bong's strenuously genre-bound exercises. (I say that having not seen his first two features, Barking Dogs Never Bite (2000) and Memories of Murder (2003), the latter of which many of my cinephile acquaintances have praised highly.)

I honestly don't remember much about The Host beyond its chintzy-looking creature and its annoyingly schizophrenic "vision." Where a lot of critics saw daring shifts in tone—first horrific, then comic, then dramatic, all smashed together seemingly at random—in its take on a family unit under attack, I merely felt I was in the presence of a sloppy, if admirably ambitious, director who apparently couldn't be bothered to settle on a consistent tone in his rampant genre-hopping. So, with Mother, Bong automatically improves on The Host by settling on one genre—that of the police procedural, with a devoted mother as the detective-protagonist—and working within those parameters. And yet, while overall I found this a more involving and far less irritating experience than The Host, and certainly would not discourage you from seeing it, there's still something about Bong's (over-?)reliance on genre mechanics that makes me somewhat suspicious of it.

At its heart, Mother is a character study of a matriarch (impressively played by Kim Hye-ja) who is so devoted to her son that, after he's convicted of a young girl's murder, she goes on the trail for the supposed real killer, so convinced she is that her son could not possibly have committed the crime. Her relationship with her son verges on the creepy (he sometimes sleeps with her on her bed, for instance), but her loyalty to him is undeniable...and, the film gradually reveals, dangerous verging on murderous.

The real kicker, though, comes in its final two scenes, in which the mother's full monstrosity comes into focus in a manner that I'm of two minds about. [SPOILERS AHEAD] As it turns out, she's not only devoted to her son to a murderous extreme—to the point of denying her son's ultimate guilt in the young girl's murder when it becomes painfully apparent—but she also turns out to be unwilling to take any responsibility for her own actions. In other words, she really isn't all that different from her mentally addled son, except that she is more aware of her own wrongdoing. But in the final scene, set on a bus, the mother does a bit of creative acupuncture in a way that, as has been noted earlier in the film, effectively clears away all of one's bad memories. The last shot is set outside of the bus as we see the formerly grim-looking matriarch getting up and dancing with the rest of her group.

This concluding gesture works pretty well on the film's own terms, functioning as a fittingly sobering payoff to carefully planted details earlier in the film. But to my mind, it also exposes the film's major flaw, one that prevents Mother from fully transcending its genre trappings: Just as the film's twists and turns feel more like immaculately plotted twists and turns than anything else, its payoff feels too much like, well, a cleverly worked-out-in-advance sick-joke payoff. The film is undeniably a well-plotted detective story, one that, as the ad-copy cliché goes, "will keep you on the edge of your seat and guessing." When it comes to adding up to more than the sum of its plot twists, however...well, for me, it comes up just a tad short. Mother plays more like a portrait of an obsessive mother imposed onto a procedural structure rather than a procedural structure that opens out into a portrait of an obsessive mother. There's something a bit too programmed about it for it to be as deeply disturbing as it wants to be. 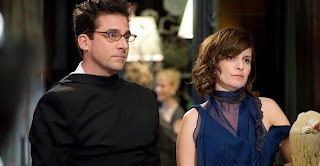 This is a slight, and slightly underachieving, attempt at a modern-day screwball comedy, but overall it's not all that bad. The ingredients for a screwball comedy are certainly here: a charming and believably down-to-earth lead duo, memorably weird supporting characters, a bevy of nutty situations and a can-you-top-this momentum that occasionally slows down for scenes of deeply felt emotion. The main idea underpinning Date Night is that its central couple, Phil & Claire Foster, having settled into numbing routine in their daily lives, rekindle their passion for each other in the course of an increasingly harrowing night out on the town. There is much subtext that could have been mined from such a premise, and now and then the script, by Josh Klausner, hits on some amusing iterations on the idea. Alas, director Shawn Levy—whose previous credits include those Night at the Museum flicks—seems more interested in efficiently moving the action along more than anything else (is this why he shoots the whole thing in shoddy-looking high-definition digital video?). Thankfully, the actors survive Levy's uninspired hand, especially Steve Carell and Tina Fey, both of whom, in a few scenes of seemingly improvised banter, show how much more inspired this movie might have been if they had been allowed to cut loose more. And hey, it runs a breezy 88 minutes and features a few funny outtakes over the end credits. Nothing special, and it doesn't come near striking distance of challenging, say, Some Like It Hot in the annals of great screwball comedies. But it's a passable night out at the movies—especially with a date. Which I did not have when I went to see it. (Ladies, I'm available...)
Posted by Kenji Fujishima at 4/21/2010 12:01:00 AM