New York, I Love You—Especially on Warm Days Like Today

EAST BRUNSWICK, N.J.—As some of you might have surmised from some of the photos that I have included in recent posts on My Life, at 24 Frames Per Second, I have begun to carry around my pocket-sized digital Canon PowerShot SD400 camera more frequently. I figured it might be nice to be able to have a camera on hand that could take high-resolution photos whenever I felt the desire to capture something in a given moment, and not just rely on my cell phone's camera to take its usual grainy-looking photographs. And I guess maybe my recent—and still ongoing—desire to make a film of my own has also fueled a desire to become a more active photographer (though no, I don't think you should be expecting anything to rival Walker Evans or Robert Frank anytime soon).

Tonight, I took a photo that I think made that newfound habit totally worthwhile: 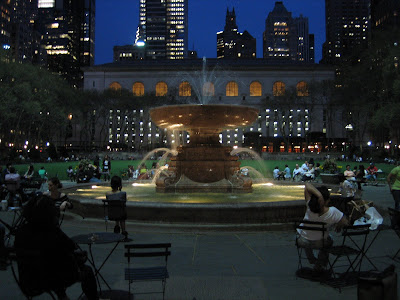 Today's temperatures reached all the way to 90°—in April, no less!—and thus Bryant Park was especially full of people in the early evening hours. A fellow WSJ employee mentioned on Facebook that she would be dropping by the park after her shift was over, so I decided to visit the area myself after my own workday was done. I didn't see her, alas (I discovered later that she had already departed the area by the time I stepped foot there)...but I did decide that, with my Canon camera in my black backpack waiting to be taken out and powered up, I wanted to try to capture the intoxicating life and bustle of Bryant Park on this particular night. I also just wanted to see how well my camera could photograph a sky that wasn't quite pitch-black night—because, alas, the Canon PowerShot SD400 has, in the past, made complete hash out of night shots, rendering everything murky and unacceptably dark.

Well...I must say, I think the result speaks for itself. Dusk seems to be the perfect time of the evening for my camera.