BROOKLYN, N.Y.—Speaking of religion: Who among you knows of the artist named Howard Finster (1916-2001)?

A few weekends ago, I ventured forth into Harlem for the first time ever to check out a private new art gallery that recently opened up. How private? So private that it's basically one family's two-story studio apartment! One of my co-workers—who, it turns out, is himself an artist specializing in scanner photography (check out his site here, if you're curious what "scanner photography" looks like in practice)—decided to turn his apartment into an informal art gallery displaying some of his own works, some of the work of other artists, and cultural artifacts he has collected over the years.

Among the works of art displayed in this gallery was this:


Two things jumped out at me about this print: first, the sheer, overwhelming amount of detail packed into this canvas; and second, the fact that much of that detail was given over to words rather than images.

When it comes to movies, a lot of critics have a sometimes seemingly knee-jerk disdain for such characteristics as "preachiness," "heavy-handedness" and "didacticism." I guess many critics just don't like to preached to—but who does, right? And we all consider film a visual art more than anything else, so of course we'll vastly prefer something expressed visually rather than verbally; if a filmmaker is so clumsy as to feel the need to spell out his/her intentions for us in the audience...well, then, where's the fun in that?

Personally, I've always taken films that go the didactic route on a case-by-case basis. So yeah, sometimes such spell-it-out-too-explicitly heavy-handedness can bother the hell out of me too. Take one of the most popular, and widely praised, films of recent years, Christopher Nolan's The Dark Knight (2008). This highly touted sequel to Batman Begins (2005) abounds in fairly graceless speechifying about, among other things, what morality there can really be in a world governed by chance and fate; but the speechifying matters less to me than this gnawing sense that Nolan is so insistent on putting his order-versus-chaos allegory across that he sacrifices character development and subtlety to do so. When he actually tries to turn his thinly veiled allegory into some kind of human drama, the lack of three-dimensional characterizations is thrown into sharp relief; there's nothing to care about on a human level beyond each character's preordained place in Nolan's grand allegorical scheme. The film ends up playing more lke a big-budget philosophical thesis paper than a drama with flesh-and-blood characters; thus, its many moments of overt didacticism—especially its "will one boat blow up the other" climax—stick out like so many sore thumbs. 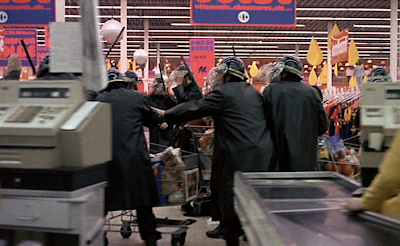 Sometimes, though, didacticism can be done in a way that's genuinely thought-provoking and maybe even emotionally stirring. When it comes to some of the more hardcore-intellectual work of Jean-Luc Godard, for instance, sure, the same criticisms I just lobbed at The Dark Knight would probably apply. Does anyone really remember much about the characters in films like 2 or 3 Things I Know About Her (1967), Tout va bien (1972), or in more recent work like In Praise of Love (2001), Notre musique (2004) and his latest, Film Socialism (2010)? In these films, to varying degrees, his "characters" mostly spout off ideas and aphorisms, and he leaves it up to us to either take his thoughts seriously or dismiss it as "pretentious." And yet, Godard's didacticism usually evinces a curiosity and engagement with the wider world that Nolan's never does; plus, for all the chatter he includes in his films, he's far more visually inventive in the ways he expresses his intellectual obsessions on the screen (witness, for instance, the back-and-forth tracking shot in the supermarket towards the end of Tout va bien, from which the above still is taken). There's an exciting sense of exploration in Godard's later work that, even at its most inscrutable, offsets any sense of preachiness; he's trying to pin down his ideas the same time we in the audience are.

Admittedly, Finster's art isn't fueled by that same sense of exploration. A Baptist pastor from Georgia, Finster often claimed that God, through visions, implored him to spread His word through his art; in that way, much of his more than 46,000 works are essentially fire-and-brimstone expressions of his faith. And yet, one look at the portrait above and one gets the sense that he is so passionately committed to that faith that he'll even go so far as to include large amounts of text, scriptural or otherwise, in his canvases in order to get the Word out. One could consider this the visual-art equivalent of the kind of talky didacticism in Godard's films or The Dark Knight, and one might even dismiss it wholesale as crude and un-artistic. For me, however, there's a certain purity of intent to Finster's art—his posters, his sculptures, his self-built Paradise Gardens—that rises above its simple means and becomes almost transcendent. It's his zeal that moves you, whatever the method.

Here's another example of his art, this one in the shape of an American flag: 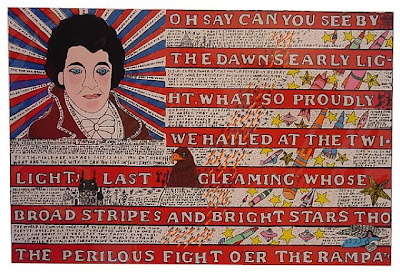 Oh, and for those who think they've never seen Howard Finster's work before...remember this album cover... 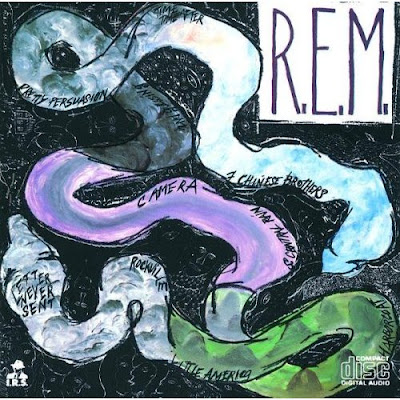 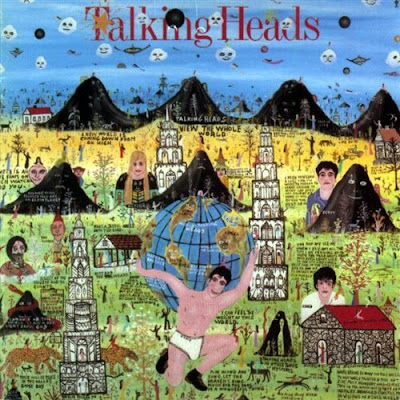 Yep, Finster designed the album covers for both R.E.M.'s 1984 album Reckoning (the band's second) and Talking Heads' 1985 Little Creatures. In the former, he collaborated with lead singer Michael Stipe, and it looks sparer than many of the Finster paintings/sculptures I've seen; the latter seems more echt-Finsterian in its denseness. Rolling Stone magazine named the Little Creatures cover the best of its year. The more you know...

You can get more information about Finster, by the way, at this ancient-looking website. He seems quite a character; I look forward to delving even more into his work in the future.