Score One for Traditional Projection! Plus, For Colored Girls 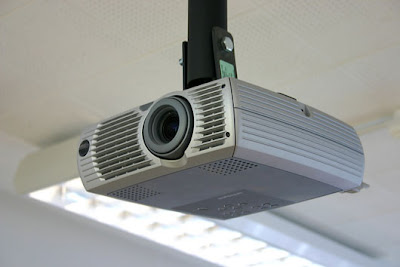 Last week, a few friends and I went to see For Colored Girls at the Regal Cinemas theater near Union Square Wednesday evening. The screening was scheduled for 8:30, but the show started about half an hour later than expected. One of the theater managers came in and announced that there was a digital-projection issue that was delaying the start of the screening, and that it would be another 10 to 15 minutes before things would hopefully be up and running correctly.

One of the friends in my group was a former employee of that particular Regal theater, and she gave me an illuminating (to me, at least) piece of inside info that I thought was worth sharing with all of you. According to her, the reason that it was going to take 10 to 15 minutes was that the projectionist had to re-download the entire digital file before trying to start the screening again. "It was actually easier before the theater went all-digital," she said. "If there was any problem with the film, we could just take out the messed-up frames and splice it back together. That only took five minutes. It takes longer now to fix those kinds of problems."

Surely many of us have noticed how big theater chains such as Regal and AMC more or less shoved digital projection down our throats overnight over the summer. While I'm far from a staunch Luddite when it comes to film vs. digital—Vadim Rizov did a fine job a few months ago in this piece at GreenCine Daily outlining the virtues of digital projection—in light of my friend's fascinating tidbit, I have to admit, I find it rather ironic, and somewhat poignant, that celluloid film, that longtime "analog" format, turns out to be, in some cases at least, quite possibly superior to the supposedly more up-to-date digital format when it comes to fixing its own issues. Score one for traditional projection! 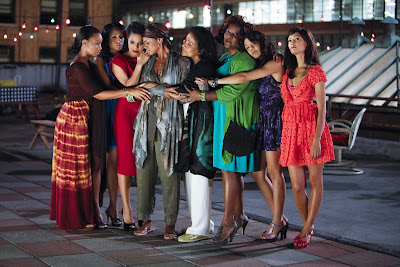 Oh, and I suppose some words are in order for For Colored Girls, Tyler Perry's screen adaptation of Ntozake Shange's groundbreaking 1975 "choreopoem" For Colored Girls Who Have Considered Suicide When the Rainbow is Enuf. Having never read/seen Shange's play (I honestly hadn't even heard of it until this film adaptation was made) nor seen a Tyler Perry film before, I came into it only having faint ideas of what to expect from it based on reviews of previous Perry features as well as this All Things Considered item about the play and people's expectations about its translation from stage to screen.
From what I hear—and correct me if I'm wrong, those of you who do know the stage drama—Shange's play is basically a series of monologues in which various unnamed African-American women recount their struggles, most of them at the hands of men. (A precursor to Eve Ensler's The Vagina Monologues?) That, on the face of it, sounds like an inspired idea, suggestive of a desire to express emotions of universal import by purposefully subtracting dramatic and character specifics and allowing these women to speak in their own voices. Perry's ungainly approach to the material is to include most of the monologues but also extrapolate dramatic material from them and filter it all through his unabashedly operatic sensibility. Alas, the near-campy melodrama of the situations Perry comes up with here—most of it shot in a mostly flat, functional TV style, with the exception of one risible (no doubt Lee Daniels-inspired) bit of crosscutting between a rape and an opera performance—has the effect of leeching away much of the power of Shange's poetry. Worse, Perry fails to incorporate the monologues into the overall dramatic structure in any convincingly organic way; the whole film ends up feeling mostly unwieldy and draggy.

If the film is affecting at all, it is mostly by virtue of the full commitment his immensely talented cast brings to the material; this mostly female ensemble is pretty excellent across the board, and Perry is at least generous enough toward these actresses—capturing them in luminous close-ups, allowing scenes to play out in long takes—to give them all moments to shine. Exquisite, soulful displays of female emotion seem to be in preciously short supply in mainstream American cinema these days, and Perry, with the help of this ensemble, generates emotions you can practically touch. That's not nothing...but it isn't quite enough to elevate For Colored Girls above the level of well-meaning but misguided.
Posted by Kenji Fujishima at 11/15/2010 06:30:00 PM