Is Next to Normal All Too Normal? 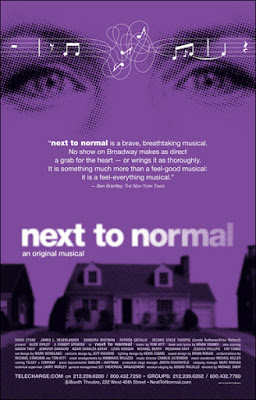 It opens with a musical number that, right off the bat, suggests disturbances underneath surface normalcy. The son complains that the mother is too overprotective; then, the daughter enters the scene, and immediately you sense an emotional rift even as the mother tries to be comforting. On the other hand, how would you react if your mother, with unexpected frankness, says ebulliently to you, "I'm going upstairs to have sex with your father"? But if you didn't already have a clue that something serious was up with this matriarch, then the climax of that opening number seals the deal: In straining to prepare lunches for her family, the mother ends up throwing a bunch of bread slices on the floor and making a mess until she catches herself, with the husband and daughter looking on in pained silence.

Spanning the heights of familial harmony to the depths of psychological horror, and ending in such a whirlwind of a crescendo that the ensuing musical silence is deafening and devastating, this opening number of Tom Kitt and Brian Yorkey's Pulitzer Prize-winning Broadway musical Next to Normal—which I was finally able to see on Saturday evening, after months of unsuccessfully trying to engender interest in it among my circles of friends—sets out the show's modus operandi. Taking its cues from the mother, Diana Goodman—who, we discover, is in the midst of a breakdown as a result of a bipolar disorder she has dealt with for many years—the show is itself defined by a superheated intensity even in its quieter moments. As an emotional experience, Next to Normal offers one of the purest and most astonishingly direct that you are likely to see on any stage right now, supported by a rousing score that somehow embraces all manner of styles and tone colors without seeming overly self-conscious.

And yet...is this is a great work? It's certainly a good one, with its compelling human drama, sensitively directed by Michael Greif and extraordinarily well-acted by its cast—with Marin Mazzie doing a spectacular job in the role that won its original Diana, Alice Ripley, a Tony—and buttressed by Mark Wendland's eye-filling three-tiered set, its coldly lit, industrial bent acting as a kind of theater of Diana's addled mind. All of that passion, however, isn't quite enough to transcend a formulaic, predictable storyline from seeming, well, formulaic and predictable; its treatment of the devastating effects of bipolar disorder on this particular character is also problematic, to say the least.

A seemingly effervescent personality stuck in the drudgeries of suburban home life finds herself feeling even more numbed-out under the influence of the myriad drugs prescribed to her; at a certain point, she recklessly decides to forgo the drugs, which triggers a relapse and leads to even more serious treatment. If some of that barebones plot summary sounds familiar to you, then you could probably trace its pedigree not only to Milos Forman's 1975 film adaptation of One Flew Over the Cuckoo's Nest (which the show name-drops for comic effect during Diana's "Didn't I See This Movie Before?" number), but arguably even all the way back to Nicholas Ray's thematically similar 1956 masterpiece Bigger Than Life. Both take place in suburban settings; both revolve around characters who, deep down, yearn to break out of a barely conscious inner listlessness; and both detail the near-destruction of a family unit as those central characters experience mental declines and risk taking the rest of the family down with them (in Next to Normal, for instance, the daughter, Natalie (Meghann Fahey), becomes addicted to recreational drugs as a result of the matriarch's travails).

Admittedly, this isn't a perfectly correspondent comparison: Bigger than Life's Ed Avery (James Mason) only becomes overcontrolling and delusional after he becomes addicted to cortisone, while Diana Goodman is already ill at the outset, with medication—a barrage of pills first, then shock therapy—only increasing her frustrations. The thematic thread, though, is comparable: suburbia as, once again—as in such recent films/books as American Beauty and Little Children—a stifling environment that drives a husband and a housewife to some kind of madness. Alas, Next to Normal, for all its emotional rigor, never really delves into any notably fresh directions with this frankly played-out theme. And even when its second act—in which Diana finds herself forgetting key memories as a result of the shock therapy, while her husband Dan (Jason Danieley) finds in this convenient side effect an opportunity for the family to start afresh—threatens to push into genuinely provocative territory, by the end it steps back into the usual gauzy Broadway-style uplift. 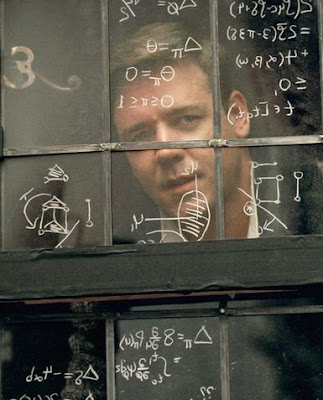 That said, Next to Normal isn't just about suburban ennui; by literalizing Diana's spiritual turmoil through the explicit use of bipolar disorder, Kitt and Yorkey demand that we take her plight seriously on a certain level as an actual disease rather than merely a metaphor for a deeper soullessness. It's unfortunate, then, that its depiction of bipolar disorder borders on A Beautiful Mind triteness. Remember the way director Ron Howard and screenwriter Akiva Goldsman condescendingly turned Prof. John Nash's schizophrenia in that film into little more than a bait-and-switch Sixth Sense-style plot twist? Kitt and Yorkey pull a similar tactic early on in Next to Normal, when it is revealed that that son we saw in the opening number is actually not alive; he died 16 years ago, and Diana has never been able to let him go. Granted, this revelation occurs about 10 minutes into the show, so it isn't stretched out for the purposes of facile "mystery." More problematically, however, the son remains an actual flesh-and-blood character in the show, literally hanging over the proceedings, tempting her mother toward a relapse. In a drama that otherwise manages to find welcome amounts of nuance in its individual characterizations and in the relationships between the characters, this gimmicky fantasy construction comes off a cheesy attempt to create a comfortable villain for the piece—the "devil" to her husband's "angel"—and the show's frequent suggestions that the son's death, and the hazily explained guilt feelings her mother still holds as a result of the tragedy, is the main cause of her disorder feels too simplistic for a psychological affliction that usually comes from more complicated roots.

The disappointing thing about Next to Normal is that all of its good intentions, laudable compassion and thrilling musicality is put at the service of an unconvincingly tidy and comfortable depiction of domestic dysfunction, mental illness and deep-seated guilt. I can't say I was left unmoved by this show, and if you're looking for a theatrical experience that will leave you feeling something for actual human beings rather than detached wonderment at empty spectacle—seemingly the raison d'être of most other Broadway musicals these days—this one fits the bill in gripping fashion. But I'm not sure I can say I felt especially shaken or challenged either, in the way that truly great art can do.

If you're still curious to see this show, however...well, all of you living in or near New York have only until Jan. 16, 2011, to see it on Broadway. And if you, like me, are able to score a $25 front-row ticket via a lottery—like I was successfully able to do on Saturday evening, then so much the better!

Here's a clip of two numbers, "You Don't Know" and "I Am the One," being performed at last year's Tony Awards, with original cast members Alice Ripley, J. Robert Spencer and Aaron Tveit: