I Want to Believe: Religion, Spirituality and Art

EAST BRUNSWICK, N.J.—A few mornings ago, as I was eating breakfast, my mother once again tried to persuade me to take up religion. This time, however, she had something of an ace up her sleeve, one that, for the moment at least, put me in a more receptive, and thoughtful, frame of mind.

Mind you, I am not by any means a staunch atheist. When it comes to religion, I echo The X-Files's Fox Mulder: I want to believe. I want to believe that there is a Supreme Being who exists to give all of us strength in troubled times, who will provide for us if we only have faith in Him and live by His guiding principles as outlined in the Bible. I have had many a moment of personal struggle where, in the heat of a particularly trying moment, I thought to myself, It would be nice, wouldn't it, if there was a God whose shoulder I could lean on right now. That would just lift a great weight off my shoulder.

I haven't really been able to find it in me to make that leap of faith, though that may be a result less of skepticism than of just not having had the time or inclination to give the whole matter of God's existence much thought. My own experiences in life has taught me that, in general, you can't afford to put circumstances in your life in the hands of some mysterious, invisible presence, and hope that things will eventually turn out all right; you have to actively work to make it so, however difficult it may be.

One of my younger brothers, though, has recently brought religion into his life; he goes to a church every Sunday and has been hanging out more often with people from that church. This past weekend, he and a few others went on a two-day-plus retreat in which they actually read through all of the New Testament.

That in itself is an impressive feat right there. I didn't realize just how impressive it was, though, until I recently talked to him about the weekend, and he recounted his experience on that Sunday when he went to his church's usual service. The priest, he says, was talking about baptism, but instead of saying that one needed to be baptized in order to feel the Holy Spirit enter into him/her, he said that one can feel the Holy Spirit if one lives the right way: exulting in the goodness of God, keeping Him in one's heart, and the like.

It was at that moment, my brother told me, that he suddenly experienced a transcendent feeling: as he claims, he felt the Holy Spirit entering into him. "It's just something you feel," he even said, when I asked him how he knew.

And that feeling moved him to the point of shedding tears.

I mus confess, my friends: When I heard that, I began to experience feelings of my own—awe, amazement...and a little bit of envy. Is there anything I can point to in my own life that can inspire such emotion, passion and reverence?


***
It's funny: I'm not a religious person—I'm inclined to look at all organized religions with skepticism—and yet when it comes to the films I watch, the music I hear, or the books I read, I am almost invariably moved when an author/artist tackles religion as a subject, or simply inspires a spiritual feeling with his/her art. 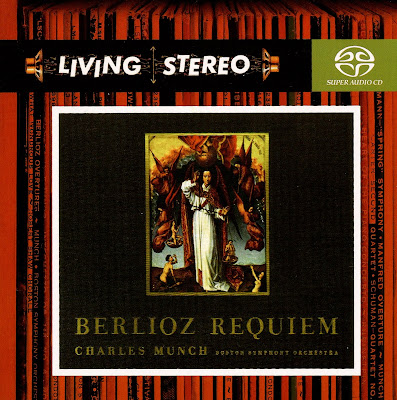 Recently, for instance, I introduced myself to Hector Berlioz's Grande Messe des morts (Requiem) via a 1959 RCA recording by Charles Munch, the New England Conservatory Chorus and the Boston Symphony Orchestra. Within the first few notes of its opening "Requiem et Kyrie"—a progression of notes that at first seems like a regular scale until it reaches a half-step that injects a sense of doubt—I knew this was going to be one of those devotional works that would inspire with its vivid sense of religious fervor. It’s a feeling that Berlioz successfully sustains throughout the work's 80-some minutes, perhaps most memorably in a boldly dramatic passage in its "Dies irae" second movement, in which the composer unleashes four additional brass bands in a musical illustration of trumpets announcing the day of judgment at hand. That is not to lessen the impact of quieter movements like "Quid sum miser," "Quarens me" and "Offertorium," all just as impressive in its feeling of contemplation and, in its concluding "amen," serenity. 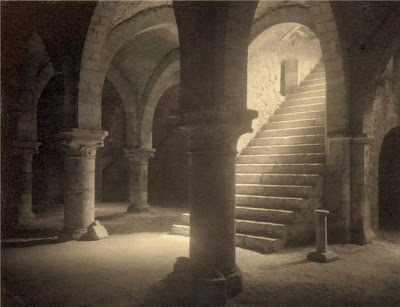 At the Getty Center in Los Angeles a few months ago, I had another quasi-spiritual experience at an exhibit featuring the photographs of British photographer Frederick H. Evans (1853-1943). Evans is best known these days for photographing cathedrals. One look at the image above, and perhaps you can see why: The earthy colors and the light illuminating the space impart a genuine you-are-there feeling, as if you yourself were walking in the church, standing in awe of God’s presence. 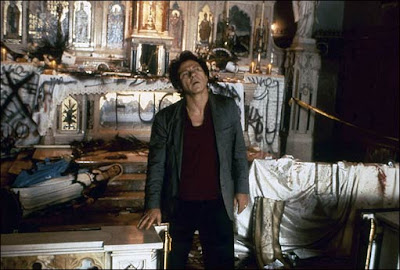 Of course, this feeling of spirituality is present in many films as well—even in films you may not expect. Last year, in preparation for Werner Herzog’s The Bad Lieutenant: Port of Call New Orleans, I acquainted myself with Abel Ferrara’s 1992 Bad Lieutenant, and even though I myself am not a Catholic, I nevertheless found myself deeply moved by the unnamed lieutenant’s guilt and anguish—to the point that, when Harvey Keitel melts down in a church towards the end of the film, crying out for a God that he fears is not there, I was on the verge of tears. Never mind whether the Lieutenant deserved to be redeemed for his many crimes; Ferrara, with brute force and gritty artistry, had made one man’s tortured religious fervor immediate and real.

That is just the tip of a huge iceberg. Michelangelo's Sistine Chapel, Mahler’s “Resurrection” Symphony, Dreyer’s The Passion of Joan of Arc (1927)—all of these, and plenty more, are examples of works of art that deal with religious belief in ways that inspired someone even as questioning of religion as I.

And the more I thought about these pieces of film, music and visual art, the more I realized that maybe I do have a religion of sorts: Art is my religion, and maybe it is there that I find something that one could call God’s presence, speaking through these artists. Maybe my brother is right that that kind of feeling of fervor in art is merely “fleeting” compared to the sustained spiritual food provided by churchgoing and living one’s life in a religious manner.

But perhaps that is why I maintain this blog: to crystallize those moments of fervor I feel at the movies, to keep the faith.
Posted by Kenji Fujishima at 8/15/2010 09:00:00 AM

Excellent.You have a new fan.