Weekend Film Round-up: Profundity, Casual and Rather Less So

EAST BRUNSWICK, N.J.—Circumstances related to family and apartment-hunting kept me from seeing more films in theaters this weekend...so no, I didn't get to see The Kids Are All Right—which went wider this past weekend—or even Salt, of which I've heard some surprisingly positive things. And nope, I still haven't seen Winter's Bone.

But the two that I films I did get to see theatrically were terrific—one of them a newer film, another an until-then-unseen-by-me classic. 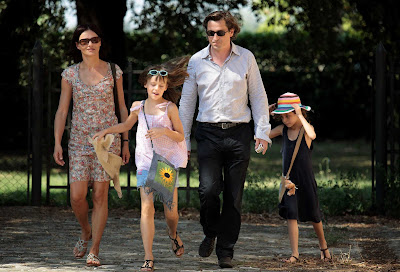 In the second half of Mia Hansen-Løve's The Father of My Children (2009), Sylvia Canvel (Chiara Caselli) and daughters Billie (Manelle Driss), Valentine (Alice Gautier) and Clémence (Alice de Lencquesaing) are forced to deal with the fallout from the sudden death of the titular father, Grégoire (Louis-Do de Lencquesaing); one of the great achievements of this film is that Hansen-Løve—by daring to have Grégoire, a movie producer who feels the walls closing in on him as his financial struggles pile up, off himself midway through the movie—forces us to participate in that grieving process, which Hansen-Løve vividly details: the waves of complicated emotions, the arc from anger to acceptance, the various ways the family members try to maintain the memory of their loving but reckless father.
What's remarkable about The Father of My Children is how visceral a movie it is, for all its talk. In its first half, Hansen-Løve drops us into Grégoire's hard-driving lifestyle, as we see him making phone call after phone call on his way home from the office; the fact that the man is so charming and likable makes his slow-motion march toward self-inflicted death that much more agonizing to witness. Once he shoots himself to death on a street—a shocking moment that Hansen-Løve never really explains, preferring to simply present it as a disheartening fact of life—the second half feels appropriately scattered, as Sylvia struggles to try to keep her husband's production company afloat and Clémence finds herself only now drawing closer to her father by exploring his past. But the grieving process eventually ends, as it must. Even as a sense of unshakable melancholy hangs over them, by the end of the film the family has moved on, underscored by Hansen-Løve's use of "Que Sera, Sera" over its end credits.

The Father of My Children tackles its weighty subject matter with a delicacy and level of observation that vaults the movie to the realm of the casually profound; as an examination of how people cope with deep, unexpected loss, Hansen-Løve's film makes for a worthy companion piece to (Hansen-Løve's current boyfriend) Olivier Assayas's equally moving and insightful Summer Hours (2008).

(The Father of My Children may still be available on IFC on Demand, if it's not playing at a theater near you.) 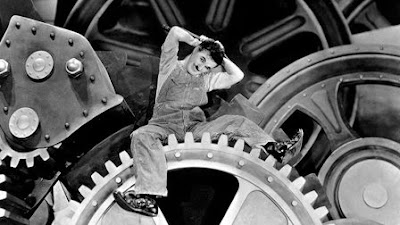 I don't think I have anything particularly fresh to add about the film that hasn't already been said; Chaplin's elegant freedom of movement and the sheer delirious audacity of its setpieces—particularly its stunning climactic restaurant sequence—speak for itself. But this technically brilliant film is also a humanist masterwork, in which Chaplin constantly seeks to highlight the human interactions that threaten to be engulfed by the general push toward cold technological efficiency, as he so uproariously savages in this sequence:

Once people accept an "innovation" like that, Chaplin suggests, people run the risk of turning into...well, sheep, as the film's opening juxtaposition of images so boldly illustrates. But Chaplin—like Jacques Tati would later continue in Playtime (1967)—leaves us not with despair, but with hope that humanity will at least soldier on.
Posted by Kenji Fujishima at 8/02/2010 12:01:00 AM