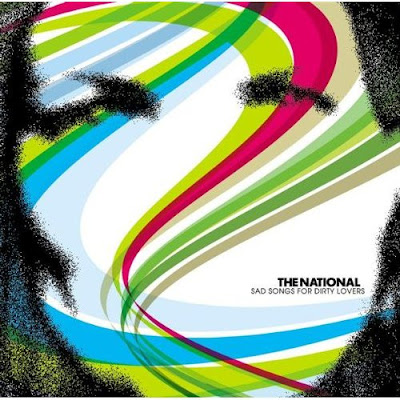 I had never even heard of the Brooklyn-based indie-rock band The National until I started seeing people on Twitter discussing their latest album, High Violet. Then I started hearing about various concert appearances the band was making in the tri-state area, including some shows at Radio City Music Hall, which is very close to where I work. Because this year I pledged to at least make some effort in keeping up with the latest in indie music, naturally I decided I would make catching up with this and the band's previous albums a goal.

Based on what I've heard, it was a goal worth making.

As many have noted, The National's stylistic influences run far and wide, from folksy Americana to electronic Britpop—all of which the band is able to fashion into an intriguingly distinctive sound of their own. But the band's lyrical content may not be to all tastes: These are not upbeat songs lead singer Matt Berninger & co. sing, to say the least, and sometimes the sense of despair—over failed love affairs, over life's usual disappointments—can veer toward oppressive. But the music that supports the band's depressive vision is frequently evocative, the lyrics eloquent, and Berninger's deep baritone emotionally expressive without beating you over the head with its emotionalism in the wailing Win Butler/Arcade Fire manner.

It's their last three albums, Alligator (2004), Boxer (2007) and High Violet that have received the bulk of the band's acclaim, and justifiably so. For me, though, their second album, Sad Songs for Dirty Lovers (2003) shows them at their most excitingly adventurous. If their self-titled 2001 debut displayed a confident mixture of folk and indie-rock elements, Sad Songs for Dirty Lovers pushes it further, throwing in electronic sounds along with string arrangements, and featuring acoustic cuts like "90-Mile Water Wall" standing alongside hard-rocking tunes like "Murder Me Rachael," "Available" and "Trophy Wife." Amidst it all, Berninger's voice remains a bedrock of deeply personal introspection, barely raising his voice yet somehow piercing the heart regardless.

Their subsequent albums refine this mixture, to the point that this year's High Violet seems to contain barely a trace of their Americana roots, focusing more on their indie-rock side. (It's also feels like their most despairing record yet; maybe that isn't a coincidence.) That's not necessarily meant as a criticism; it's proof that The National is still growing after all. Still, I would submit that their first two albums, especially Sad Songs for Dirty Lovers, present this terrific band at its freshest, and do not deserve to be undervalued in light of their recent, more widely celebrated work.

Here's a taste—a live performance of the lovely album closer "Lucky You":