Video for the Day, Friday the 13th Edition 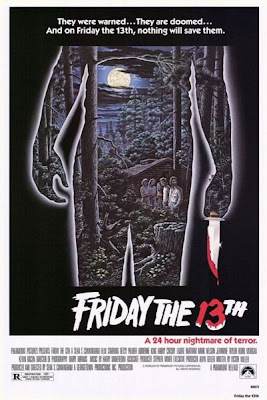 I know, I'm being super obvious and predictable here. But still. The Friday the 13th films were a part of my earliest days of cinephilia, so I have a certain attachment to them, as unapologetically trashy as they are. Beginning first as intrigue at what illicit pleasures potentially lay behind the tantalizing VHS boxes of those (and many other horror) films, becoming full-blown fascination when I taped a bunch of the censored-for-TV versions of the films during a marathon on the USA cable network, and then finally having my curiosity sated when I sat down and watched the unedited versions on premium cable/VHS/DVD. Seeing an arrow getting rammed through Kevin Bacon's throat in the original Friday the 13th (1980)—yeah! Witnessing Crispin Glover get a corkscrew through his hand and a butcher knife in his face in Friday the 13th: The Final Chapter (1984)—awesome! And what about seeing Jason Voorhees rip the heart out of Ron "Horshack from Welcome Back, Kotter" Palillo in the literally thunderous opening of Friday the 13th, Part VI: Jason Lives (1986)? That satisfied me as well, I'll freely admit. And don't forget the sex and the breasts!

Obviously, I'm older, wiser and more humane now. Maybe. (Or maybe not. I recently got my hands on a DVD copy of that 1987 Hong Kong action flick Eastern Condors that I wrote about here, and all I feel like doing these days is watching Sammo Hung, Joyce Godenzi, Yuen Biao and Yuen Wah kick people's asses in various balletic maneuvers.) Back then, though, I was fairly easy to please, at least in the gross-out movie department.

All of this is a nostalgic preamble to this video, courtesy of the folks at Cinemassacre.com, which counts down one person's 13 favorite moments from the Friday the 13th series. There are many others I could list, but this covers a lot of the more memorable high points—high bloody points.

***
On that "red-not-blood" note, this particular week in my life and My Life, at 24 Frames Per Second ends. Posting has been lighter than usual, I know. I've got one interview on deck, so I've been working on that on-and-off this week; in addition, the search for a New York apartment has soldiered on in spite of some unexpected setbacks (I won't go into those now; maybe later). Worry not, faithful readers; I'm planning an early return to blogging form on Sunday with a post on a subject that fascinates me.
What could that subject be? I guess you'll just have to come to my place on Sunday and find out, won'tcha? (Hint: It has to do with something many people like to do/express in a public place on Sundays.)
Posted by Kenji Fujishima at 8/13/2010 12:15:00 AM

The first F13 remains the only one I gave a positive review to (though 2, 3, and 4 weren't as bad as all that followed). F13 part 2 is especially noteworthy for being a ripoff of Twitch of the Death Nerve, Mario Bava's bloodbath that found a home on VHS in the 80's under the title "Carnage."

F13 part 3 was one of the highlights of my days of perceiving 3-D, though I'd already been hardened for 3-D gore by Andy Warhol's Frankenstein. I wasn't especially enamored of the remake of F13, but it was one of the better rehashes of 80's horror. I saw it the same day I had a screening of My Bloody Valentine 3D. That 3D experience was nothing like F13 3--because now I can't perceive 3D!!

I'm going to watch the video you linked to, so I can feel like a teenager again.

Actually, I've only seen the Paramount Friday the 13th films, Parts 1-8. And I haven't seen the recent remake. But yeah, the first four films in the series are the best ones; then the series descends into self-parody and cheesy gimmicks. Compared to, say, the self-consciously campy humor of Part VI: Jason Lives, the first four are models of classical style and purity. (That said, believe it or not, Part VIII: Jason Takes Manhattan is actually more serious and intense than you might expect, as long as you can put aside the disappointment over the fact that Jason only takes Manhattan in the film's final 20 minutes.)

Oh, and I do keep meaning to check out Twitch of the Death Nerve. Because surely Mario Bava bests Steve Miner any day of the week, at least in the style department.

One of the plusses of working in a video store in the 80's was that I got to see all manner of obscure movies that made it to VHS but never to DVD. TOTDN wasn't called that when I saw it (as I mentioned, it was called Carnage) but it was one of the numerous outrageous horror videos we had in the store. The one I'll always remember was Necropolis, a film we promoted with a sticker that said "this movie has a chick with six tits!" It was nasty, and not the kind of good nasty 6 boobies would promise, either.

If I'm not mistaken, TOTDN features 13 murders too.

I remember when I was young during the pre-Netflix era, I would frequent a local (non-Blockbuster) video store, at least whenever my mother deemed it an appropriate time for me to indulge in my nascent cinephilia. (She didn't allow me to rent videos whenever school was in session, only on long vacations and in the summer.) The horror section would be the one I'd immediately go to first...if nothing else, just to take in all those freaky VHS covers. Once in a while, I even rented some of those horror titles—like, say, Happy Birthday to Me the bizarre 1981 slasher flick with Melissa Sue Anderson, Glenn Ford, and death by shish-kabob.