BROOKLYN, N.Y.—In addition to binging on alcohol to celebrate my 25th birthday on Saturday night (which went very well, by the way; I couldn't ask for more than to see all my various social circles converge in one concentrated area), I ended up binging this past weekend on Japanese cinema. It just somehow worked out that way. So on Friday night, I visited Asia Society to see my first ever Mikio Naruse film, Yearning (1964); then, on Saturday, I first introduced myself to the feverish visual splendors of Hiroshi Teshigahara's Woman in the Dunes (1964) at Film Forum (the opening selection of an ongoing retrospective of some of the film-scoring work of esteemed composer Toru Takemitsu), and subsequently followed that up with my second viewing of Yasujiro Ozu's Tokyo Story (1953), in a new 35mm print at IFC Center. All three films offer starkly contrasting cinematic experiences, but there are some intriguing undercurrents that link them together, undercurrents that could be considered distinctly Japanese in nature. In that sense, then, this weekend was also one of getting closer to my cultural roots through cinema—not inappropriate for a birthday weekend.

Being that both the Naruse and Ozu films are intimate dramas filmed in a unassuming manner, and Teshigahara's film is an existential nightmare that thrives on expressionistic stylization, it's difficult, on the surface, to see much in the way of similarities. And yet, all of them share at least one common theme: the weight of cultural/societal expectations bearing down on characters, leading some of them to suppress their innermost desires. 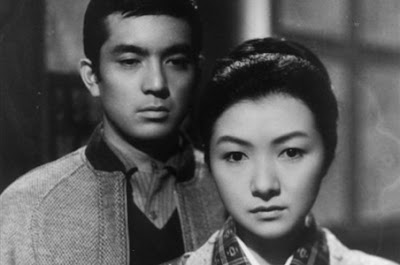 Reiko (Hideko Takamine), the central character of Yearning, is a widow who is still running her late husband's store 18 years after her husband died in World War II. Though the mother-in-law is both grateful and ambivalent about Reiko having spent so many years of her life basically preserving her dead husband's memory through that store, others who are angling to turn it into a supermarket—in order to compete with an already existing supermarket that is driving smaller businesses to ruin—feel far less compunction in flat-out dumping her and installing son-in-law Koji (Yuzo Kayama) as its head. All the while, though Reiko outwardly expresses a selfless concern for the store, every so often you see glimpses of an inner desire to break free from a life that she has possibly wasted on the memory of a dead man, or so Koji bluntly says to her at one point in the film. And yet...why has she persisted all these years? Is she sincere, or is preserving her late husband's memory something she feels culturally expected to do? Naruse never stoops to clarifying her motives, leaving us to draw our own conclusions; the result is a film whose surface simplicity masks a deep well of psychological complexities all the way to the blunt-force tragedy of its final shot. 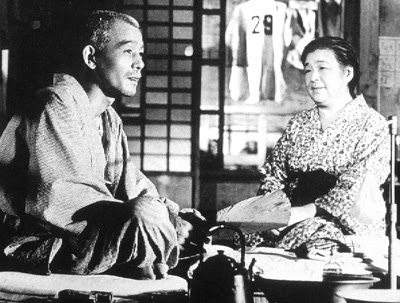 Tokyo Story is just as rich in unspoken emotional subtexts; its children-ignoring-parents angle is really just the tip of a monumental thematic iceberg. Ozu called his film Tokyo Story for a reason: Tokyo, then as now, was the prime mecca of modernization in post-war Japan, and Ozu used this as a springboard for a timeless meditation not only on modernization's effects on a newer generation of Japanese, but also on the cultural gap that inevitably develops as older Japanese folk deal with societal shifts. Though the two children of Shukishi (Chishu Ryu) and Tomi (Chieko Higashiyama) Hirayama have long adjusted to the fast pace of city living, Shukishi and Tomi both find themselves bewildered by their children's impatience. On a certain level, they understand their children's inability to spend more time with them in Tokyo; they all have their own lives to lead, after all, and obviously they're children anymore. It has to be bitterly disappointing to a parent, though, to realize that he/she has become a mere burden to his/her children, not the source of love or wisdom that he/she once was. Yet, if Shukishi and Tomi do feel that crushing sense of disappointment, they mostly keep it to themselves, taking pains to avoid direct confrontation. (Only Shukishi goes so far as to give voice to that disappointment—and then, he only expresses his true emotions to friends his age over drinks.) Ozu, however, spares no one with his serenely still camera positions; his gaze may be empathetic, but it is also ruthlessly observant. Tokyo Story wrings a lot of drama out of things left unsaid, as a result. 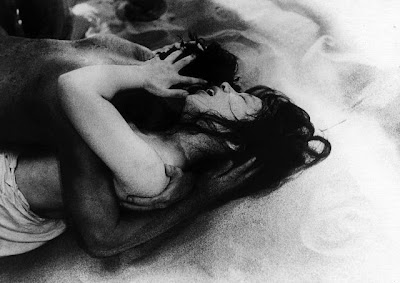 If Yearning evokes some of the dramatic power of melodrama and Tokyo Story evokes something approaching real life, Woman in the Dunes tells a more overtly allegorical tale of Niki, an entomologist (Eiji Okada) who gets trapped in a sand dune out in the desert with a widow (Kyoko Kishida) who has spent years shoveling sand in order to prevent her home from being swallowed up, as well as for the gain of the villagers above ground. Look past Teshigahara's expressionistic imagery, however, and the film offers yet another portrait of characters stuck in long-accepted societal roles. The nameless widow accepts her fate in part because (in a character detail that vaguely recalls Reiko's attachment to her late husband in Yearning) her husband and daughter, killed in a sandstorm, are, she is told, buried somewhere in that dune, with her endless shoveling a way for her to supposedly get closer to finding them. Whatever her initial resentments about her Sisyphean role, she has now gotten so sucked into her daily routine that she can't even find it in herself to question it. Niki, meanwhile, spends a good deal of the film trying to escape the fate into which he has been unwittingly ensnared...but, as time—years, it turns out—passes, he gradually finds himself settling into that fate, to the point that (spoiler alert) when the widow's ectopic pregnancy forces her to be lifted from the sand dune for medical attention, he finds himself so comfortable with his life now that he convinces himself that he can always think about escaping later on.

Thoughts of "Stockholm syndrome" will inevitably cross the minds of many in seeing Niki's disturbing story play out in Woman in the Dunes; in a sense, though, all of the main characters in these three films are hostages to something, literal or otherwise. Reiko in Yearning is captive to both her in-laws and her husband's memory, to the point that it prevents her from being able to fully experience life on her own—and when she finally creates such an opportunity for herself, she finds that emotionally she can't fully give into that freedom. As for Shukishi and Tomi in Tokyo Story, one could say that they remain hostage both to changing times and to their own natural deference to their children; they are so devoted to their kids that they find themselves slaves to their whims—and even when it turns out those whims are less than wholly affectionate in nature, they go along without complaining, because, in their mind, to do so would be "burdensome."

I've always heard that—stereotypical or not—it's part of the Japanese character to be deferential and agreeable to everyone, especially to blood relatives. Heck, despite my being raised almost entirely in America, I often think I have some of those specific cultural traits in me: a penchant for avoiding confrontation, a sense of duty to larger communities, a willingness to make sacrifices for others. So seeing these three films, with their in-depth dramatizations of certain aspects of the Japanese character, consecutively turned out to be an eye-opening experience, inspiring reflection on a side of my cultural heritage that I honestly don't often reflect much upon, at least compared to my Taiwanese side. In many ways, these three films brought me closer to my Japanese heritage than my three trips to Japan ever did!

Email ThisBlogThis!Share to TwitterShare to FacebookShare to Pinterest
Labels: blog-only reviews, films seen in theaters, Hiroshi Teshigahara, Mikio Naruse, photos with me in it, Yasujiro Ozu

What a fascinating post, from so many angles. I appreciate your insights on the films (I haven't seen the Naruse title but think highly of the other two) and really admire the personal notes you wove in at the end. Even though I have no Japanese heritage at all in my background, contemporary Japanese culture has made quite an impact on my children through their interest in anime and manga, and my daughter in particular has extensively immersed herself in that sensibility (not just shallow pop culture wannabe stuff though, I want to add.)

Of course, I've been learning a lot about Japanese society watching a lot of Kurosawa, Ozu and Mizoguchi films in my ongoing Criterion project, and now I'm eager to discover more beyond those "big three" film makers. I also reflect on how much has shifted, for the better of course!, in cross-cultural relations over the years since my grandfather fought in the Pacific Theater in World War II.

I'll also say that the "penchant for avoiding confrontation, a sense of duty to larger communities, a willingness to make sacrifices for others" is found in other cultures too! (Not disputing with you here, just indicating that your comments resonated with me, an American suburbanite guy of primarily Dutch descent.) And I love that note about you in the same neighborhood as the hot springs in Tokyo Story!

Thank you, Dave! Actually, I was born in America, so I kinda feel like I've been learning a lot about my own culture as well (or at least a part of my heritage, as I am a mix of Japanese and Taiwanese) from some of the Japanese films I've seen.