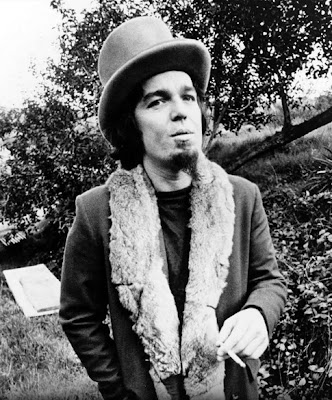 The passing, due to complications from multiple sclerosis, of the musical and visual artist many in this world knew as Captain Beefheart demands to be acknowledged.

Putting aside his wide diversity of musical influences and the extent of his own influence on later punk-rock and new-wave bands like Talking Heads, Devo and many others, there remains the music: some of the most deliriously experimental, defiantly personal and endlessly fascinating rock ever recorded. When I heard that Van Vliet had died yesterday, I immediately decided to revisit his 1969 classic Trout Mask Replica and found myself once again seduced—yes, seduced—by its challenging Arnold Schoenberg-like dissonances and wild and weird poetry. Even his relatively "accessible" later work—I'm thinking of his last three albums, Shiny Beast (Bat Chain Puller) (1978), Doc at the Radar Station (1980) and Ice Cream for Crow (1982)—suggest gleefully confounding glimpses into one messed-up mind. I mean that as a total compliment, of course; he was a true original, and one can honestly say there hasn't been music quite like his then and now.

For what it's worth, the amusing Twitter feed @Discographies—which bills itself as "a definitive guide to an artist’s body of work (studio albums only) in 140 characters"—summed up Captain Beefheart's music in this way:

And finally, some video footage, this of his appearance on Saturday Night Live in 1980 performing two of my favorite Beefheart songs, "Hot Head" and "Ashtray Heart," from Doc at the Radar Station: