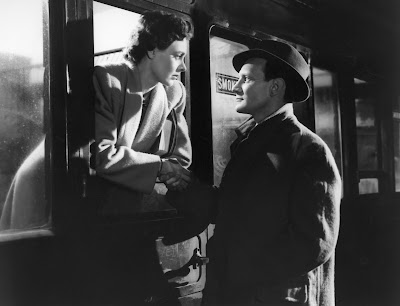 I'm usually the type of person that keeps to myself on my long commutes back and forth. I have my iPod loaded up with a new music album or podcast for the day; I've got a book in my bag to read; and when I'm not in the mood for either, I have my (increasingly all-too-frequent) penchant for falling asleep to rely on.

But my commute home on Sunday night was different—different in such a way that I still haven't forgotten the encounter, more than a day after the fact. Nor do I necessarily want to forget.


***
It begins with a woman who decides to sit next to me in a two-person seat on the NJ Transit train car in which I was sitting. As I make quick glances in her direction, I notice that 1) she is breathing fairly hard, as if she had just ran to catch this train; 2) she is straightening out her jeans, perhaps in an attempt to make them feel less tight on her possibly by-now sweaty legs than they were before; and 3) she strikes me as a fairly attractive-, if older-looking, lady.

I have to admit, I feel an inkling of desire to engage this woman in conversation in some way, just for the hell of it. But I have a shy streak when it comes to total strangers, and as I said earlier, I usually keep to myself on long train rides back and forth. (Hey, I currently have James Joyce's Ulysses to plow through!) So the ride back to New Brunswick, N.J., begins with us in our own private spaces.

This is yet another hot and humid scorcher of a day...but really, you don't know "hot and humid" unless you're underneath New York Penn Station (and all New York subway stations, for that matter). It feels like a sauna down there compared to the climate above ground! Thankfully the train cars themselves have air conditioning...but that doesn't necessarily mean a whole heck of a lot when one of the train-car doors is wide open as the train is moving quickly through a tunnel—with the hot air from outside seemingly counteracting the cool air of the train car's a/c.

And then the woman sitting next to me speaks up: "If I had known that's what you were going to do, I would have gotten up and done it myself."

"Ah, it's all right," I respond. "I was hoping someone in the front would have done it."

"Nah. I guess people would rather suffer than get up," she says.

I chuckle at this...and then the conversation ends there, for the moment. In the meantime, I'm trying to get into Ulysses and finding myself nodding off while I notice, out of the corner of my eye, the woman next to me looking at her cell phone, audibly chuckling at text messages and texting back. I'm naturally curious about what in those messages is leading her to react so vocally...but I figure it's her business, not mine.

The train conductor comes around to collect tickets, and so I whip out my $361 monthly pass to show him; the lady next to me takes out a regular train ticket. When the conductor reaches us, he takes her ticket, glances at my pass and puts the appropriate train-stop markers on the seat in front of us.

"You must really have a long commute," she then says to me, apparently having noticed the fact that my pass has "NW BRUNS" written on it.

"Oh yeah," I reply. "And it's getting increasingly irritating by the month."

That is when the encounter becomes interesting. From there, we begin to converse on various subjects, many of them personal in nature. Among other things: I discover she has apparently walked all the way from 97th Street that afternoon down to Penn Station, a feat that astonishes even me, a committed Penn Station-to-News Corp. walker (though I've been slipping recently thanks to the heat). Later, she tells me she is an aspiring writer who used to write a lot of erotic fiction, but only got one piece of literature published; she says she currently has a screenplay she's trying to shop around in Hollywood based on her own romantic experiences with a cheating former husband whom she mostly refers to as "that son of a bitch" during our conversation. She even explains to me what those text messages she is responding to are all about: she says they are from a guy she once pined for, but who apparently hasn't reciprocated...until now? Currently, she tells me she is a freelance graphic designer, and that she is living with her parents.

That is far from an exhaustive accounting of topics covered, but the point is: I listen to all this with intense fascination, partly because her experiences seem so wildly adventurous compared to my comparably humdrum life, but also because she recounts it all with a spunky personality that I find utterly disarming and oddly charming. I honestly don't think I've ever come across anyone quite like her—certainly not on a train. Also, she seems to take a genuine interest in the things I tell her about my own life: my current vocation and my future career aspirations. The fact that she is apparently an aspiring screenwriter herself turns out to dovetail quite nicely with my interest in writing film criticism.

Alas, she gets off five stops before me, so our conversation ends up being cut shorter than I would have preferred. And though we have both exchanged our names, who knows if we will ever meet again?

But the feeling—the "afterglow," if you will—after I am left on my own again is not one of deep regret in the least. Instead, it's the kind of feeling I have coming out of a theater after having seen a great film: the feeling of having been privy to the mind and heart of another person for a privileged amount of time, seeing the world through someone else's eyes, and interacting with that worldview in your mind. In a way, the encounter reminds me just how richly fascinating and varied a species humanity can be—the kind of human interaction that truly makes me feel glad to be alive.

P.S. In the midst of our conversation, I brought up the fact that, a few months ago, I had been working on-and-off on a screenplay for a short film I myself had in mind to make. (No, folks, I haven't completely abandoned the idea...but other projects—like this blog, for instance—have gotten in the way.) In that screenplay, I envisioned a kind of meet-cute in which a man notices a woman's reactions to a film in a theater and thinks that perhaps he has found a kindred spirit of some sort...and then, as luck would have it, he gets a chance to engage this woman on a train in person and seizes upon it. Wait a second: That sound a bit like what occurred on Sunday night! How "meta-" can you get...?
Posted by Kenji Fujishima at 7/27/2010 11:30:00 PM

Email ThisBlogThis!Share to TwitterShare to FacebookShare to Pinterest
Labels: anecdotes from my life