EAST BRUNSWICK, N.J.—Technically, I saw four films theatrically on Friday in addition to Predators: an early Yasujiro Ozu silent film from 1935, An Inn in Tokyo, and two more Anthony Mann films, The Far Country (1954) and The Tall Target (1951). The Ozu, however, kicks off a months-long retrospective at IFC Center of which I would like try to keep track in monthly installments at this blog; and, of course, this week I'm aiming to round-up the handful of Mann films I've been able to see during my weekends at this three-week series at Film Forum, coming to an end this week.

So Predators, a reboot of the popular 1987 action/sci-fi/horror hybrid, is what remains of my weekend in the movie-theater dark...and actually, it's not bad. 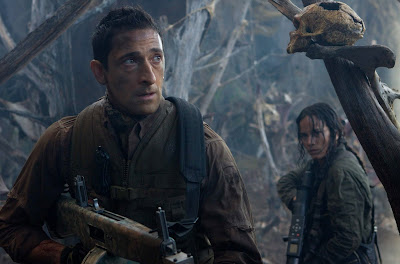 For one thing, it has a promising idea underpinning the mayhem. Eight strangers are literally thrown into a jungle environment populated by two races of alien Predators, with the subtext-rich idea that these humans themselves are, in different ways, dregs of society: criminals, enforcers, gang members, combat veterans. Do they thus deserve to be hunted by these nameless aliens, or will the film assert their right to be considered human? And it has in Antal a skilled craftsman who brings a likable B-movie breeziness to the big-budget spectacle, with action scenes that are shot and edited with imagination and relatively classical precision (none of that Paul Greengrass near-incoherence here), and with actors who bring a wealth of memorable character detail to their two-dimensional roles. (Laurence Fishburne, for instance, is a scream as a lone human survivor on that island who has lived through 10 "seasons" of alien hunting.)

Alex Litvak and Michael Finch's script, alas, doesn't end up doing a whole lot with the humanistic implications of its premise, and Antal is less successful at building up genuine terror or suspense. In the end, it's just another stalk-and-slash movie. (But then, so was John McTiernan's 1987 original, to be honest, however skillfully made and spiked with machismo.) Nevertheless, it has some fresh ideas, fine acting, a few memorable setpieces—including an alien-vs.-Yakuza member swordfight that is a small masterpiece—and a final image that ends the film on an agreeably ambiguous note. Predators has its genuine cinematic pleasures; in a summer that hasn't provided a whole lot worth getting excited about in the megaplexes, especially in the action department, such pleasures are worth savoring...at least before Inception comes along. Which, actually, is just around the corner...
Posted by Kenji Fujishima at 7/12/2010 12:01:00 AM