What It Means for a Film to Be "Revelatory"

EAST BRUNSWICK, N.J.—Sure, I love to be touched and entertained at the movies as much as the next moviegoer. But when I come across a film that, by virtue of its artistry, refreshes the way I perceive something in the world in which I live and breathe...well, that kind of film is, to my mind, something that deserves to be treasured above many others. 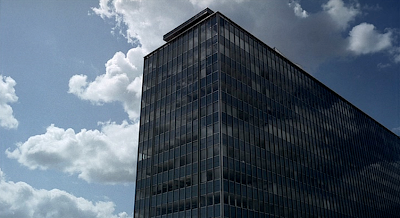 One of the many reasons that I love Jacques Tati's Playtime (1967) as much as I do (even without having seen it in its original 70mm format, granted) is that, in his immaculate reconstruction of a modern metropolis, the great French comic filmmaker manages to construct a world so close to our own that he makes it all but impossible for us not to take notice of the looming skyscrapers and chilly modernist architecture whenever we find ourselves in a big city. I know that after every time I've seen this film, I always find myself walking around in midtown Manhattan and looking up more often to take in the sheer vertical majesty of the skyscrapers that loom above me.


This past weekend, I finally saw Michelangelo Antonioni's 1964 film Red Desert, and only five minutes into it, with its opening blurry and non-blurry shots of factories and industrial waste enveloped in a fog, I knew that this would be another one of those kinds of cinematic works of art. Surely everyone has seen or perhaps even walked amidst an environment such as this: coldly industrialized, uniquely modern, bereft of humanity. But Antonioni, with his distinctive eye for landscape and architecture, visualizes his images in a way that snatches an unexpected grim beauty from the air of general dehumanization. 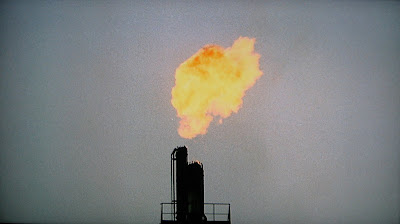 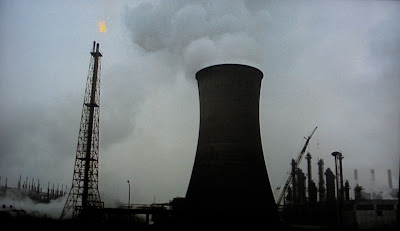 There is plenty more to Red Desert than mere visual beauty, of course: It is of a piece with Antonioni's previous examinations of spiritual isolation (L'Avventura, La Notte, L'Eclisse), but this time on a grander and more overtly expressionistic scale. But ultimately the factories, the landscapes, the architecture and Antonioni's ravishing use of color are what I cherish most about this film.


One of the functions of great art, I firmly believe, is that it has the power to sharpen your senses and increase your awareness of what is around you. Now, I have a feeling that whenever I find myself looking at a factory or walking in an industrial area, Antonioni's eye-catching depiction of these landscapes in Red Desert, and the way those landscapes correspond with Monica Vitti's desperation for human connection, is the association I will make in my mind. Antonioni's way of viewing the world has been seared into my mind's eye. This is what I consider "revelatory"—perhaps more viscerally so than intellectually, but either way, it's profoundly beautiful.

If any of you dear readers of mine have films, or other kinds of artworks, that affect you in this way, by all means, shout out your praises for such works in the comments section of this post!
Posted by Kenji Fujishima at 7/29/2010 12:01:00 AM