EAST BRUNSWICK, N.J.—For most of us in the New York/New Jersey area, this Fourth of July weekend meant trying to keep cool amidst temperatures in the mid- to upper-90s. That's one justification, at least, for my spending five or so hours on the evening of July 4 at Lincoln Center's Walter Reade Theater watching John Woo's complete and uncut Red Cliff (2008-9). The other, of course, is that this seemed like the kind of film that demanded a big-screen experience with a large crowd. Certainly my home-theater set-up wouldn't be able to quite do it justice.

I was not disappointed with the experience...far from it. 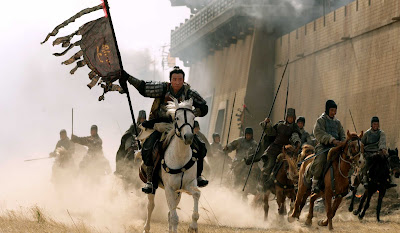 When I saw, last year, that Magnet Releasing was distributing Woo's two-part, 288-minute epic—the Hong Kong auteur's long-awaited return to his home turf after a decade in the Hollywood wilderness with only Face/Off (1997), really, to proudly show for it—here in the U.S. in a version chopped down to about half its length, I resolved never to see this bowdlerized version in theaters; why plunk down money to see Woo's vision—inspired by a selection from a 14th-century classic of Chinese literature, The Romance of the Three Kingdoms—mutilated in a misguided attempt at "mass appeal"?

So the screening of Woo's uncut version at Walter Reade as part of this year's New York Asian Film Festival was my first encounter with the work in any form. And, folks, it is utterly magnificent: a triumph of long-form storytelling, and the kind of sweeping popular entertainment that simply hasn't been executed on such a grand scale, and with such smashing success, in a long while. 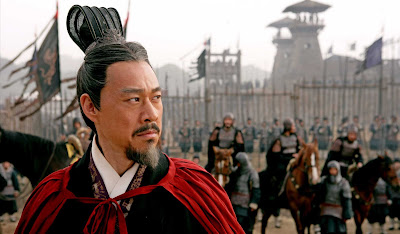 For all its impressively mounted battle sequences, meticulous focus on war strategies and familiar Woovian poetic flourishes, what really impresses me about Red Cliff as a whole is its careful attention to character detail. Though it tells a story of war among three kingdoms in 208 A.D., this isn't an intellectual chronicle of process like, say, Steven Soderbergh's two-part Che (2008); there are flesh-and-blood characters here, inflated to mythic size but still seen clearly as individuals with personalities and burning passions. Even Cao Cao (Zhang Fengyi), the ruthless Prime Minister/general who persuades ineffectual Emperor Han to wage war against the Wu and Xu kingdoms, is depicted with a measure of nuance, not as a mustache-twirling one-dimensional villain. At one point in Part II, he delivers a morale-boosting speech to his decimated-by-typhoid troops with a regretful intensity that suggests deep personal wounds underlying his actions. He's a sad, lonely man, but Woo gives him his full due.

As for those battle sequences, a couple of which last nearly half an hour: They're certainly awe-inspiring in its sheer scale, but that is not to say that Red Cliff is just a mindless, war-mongering action picture. Amidst the carnage—which Woo, as expected, gives his usual balletic Peckinpah-like treatment—there are moments that suggest a moral recognition of the personal costs of war even as we are invited to exult in the violent spectacle. By the end, even as a tenuous peace has been restored in the three kingdoms, viceroy Zhou Yu (Tony Leung) remarks, "There is no victor here." Instead, there are only small personal victories—which, as usual in a John Woo film, often means the recognition of friendship and respect among men.

This great achievement in epic filmmaking certainly provided all the fireworks I needed on July 4—and I didn't have to stand in the hot outdoors to get my fix!

(Both the edited and uncut versions are available on DVD and Blu-ray.) 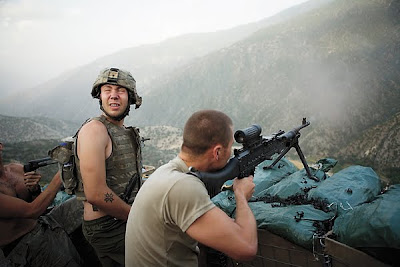 For a far less sensationalized take on warfare, there's Restrepo (2010), the Sundance Grand Jury Prize-winning documentary that follows a platoon for 14 months, from May 2007 to July 2008, as its members are stationed in Korengal Valley, the most dangerous area in Afghanistan. The film's title refers to the last name of one of the members who is killed early on in the deployment; in his honor, the troop builds an outpost and names it after him. Sebastian Junger and Tim Hetherington's film is likewise infused with a similar sense of melancholy, most potently in its haunting closing stages.
Restrepo is, in many ways, an admirable film: Junger and Hetherington—the former a reporter (best known for The Perfect Storm), the latter a professional war photographer—use their embedded position in Battle Company to capture some startlingly visceral, intimate and oddly beautiful footage of daily life amidst the pressure of being constantly under fire. And the film itself has been skillfully constructed and edited (by Michael Levine) to truly immerse you in the herky-jerky rhythms of army life; when the troop is faced with gunfire, it is as sudden and shocking for us as it no doubt is for Battle Company's members.
But it's most noteworthy quality—its journalistic objectivity—turns out to be something of a limitation as well. While the filmmakers are to be commended for standing back and allowing us to draw our own conclusions about what they present to us onscreen—a refreshing approach in the age of gleefully partisan Michael Moore/Morgan Spurlock "documentaries"—that nonpartisan perspective also means that Restrepo essentially adds up to just another documentary about how war is indeed hell, and how each day is often merely a struggle to survive and stay sane. Admittedly, it's no small thing to be reminded of this universal truth, especially for those who have never been thrust into these life-or-death situations. Nevertheless, Restrepo feels more like a film that reiterates rather than illuminates. Of both this particular conflict in Afghanistan—the filmmakers, for instance, don't bother to engage with the Afghan locals living in the area where Battle Company sets up camp—and war in general, the film, to my mind, doesn't really say a whole lot that we didn't already know.

As a tribute to the fortitude of these particular men in these particular situations, Restrepo is compelling and, in the end, moving. Just don't expect any fresh revelations about life during times of war.
*** 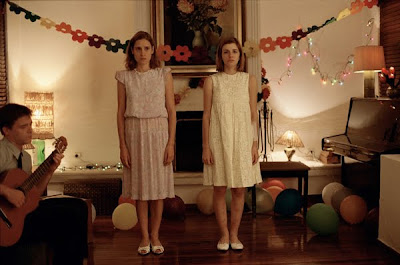 The Greek provocation Dogtooth (2009) is certainly not a documentary...but director Yorgos Lanthimos follows the lead of the great Luis Buñuel and grounds his surreal universe in something shot, by Thimios Bakatatakis, to feel almost like reality. The result of Lanthimos's eerily precise technique is that the film's surface sobriety clashes with the madness of its unnamed, unbelievably sheltered clan.

How sheltered is the family in Dogtooth? So sheltered that the children are taught that a word like "zombie" means "small yellow flower"; that they're led to believe cats are huge creatures that like to feast on children's flesh; and that the airplanes that pass by overheard are just toys to be played with. All of this, and much more, has been orchestrated by their parents (Christos Stergioglou and Michele Valley) in an apparent attempt to shield their kids from the outside world to an extravagant degree, to the point that the father becomes abusive and near-homicidal when an outside influence threatens their nutso Eden with—gasp!—videotapes.

Some have already found a satire of dysfunctional family values in this film, while others have discovered, in each unnervingly polished frame, a social critique of authoritarianism. Well, okay. For me, Dogtooth works purely and simply as a beautifully sustained piece of far-out deadpan pitch-black surreal comedy. When you think it's gone too far, it just goes further. Its delirious perversity is pretty amazing.
Posted by Kenji Fujishima at 7/06/2010 12:01:00 AM