EAST BRUNSWICK, N.J.—I know, I know: I should have been packing during the long Labor Day weekend that just ended, because this coming weekend I'm going to be officially moving into my new apartment in Crown Heights. But no; mostly I just stressed out upon realizing just how much I needed to do before pulling off such a move, and how little experience I've had with all this moving stuff. So as of now, my room isn't filled with boxes filled or waiting to be filled; it's, as David Byrne famously sang, "[the] same as it ever was."

I will do some packing during this week, folks, I promise! If you want, I'll even offer photographic proof of my progress.

In the meantime: I saw a really mixed bag of films theatrically during my long weekend. Since I can't really find a thread linking them all, capsules follow. 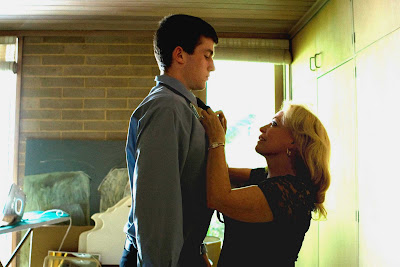 In his feature debut, Australian writer-director Michôd envisions a (crime-)family unit so insular and protective of their own that, when outside forces threaten to cut it down, some of the family members—chiefly, the sociopathic Andrew "Pope" Cody (Ben Mendelsohn), and later the coldly calculating, kindly-on-the-surface matriarch (Jacki Weaver)—are willing to kill within the family in order to shield it from outside harm. It's "survival of the fittest" writ large; fitting, then, that the opening credits unfold over shots of details from a panorama depicting animals in the wild.

Impressive for the ways it builds mounting tension with the sparest of means and a welcome emphasis on character, Michôd's deterministic take on family might be oppressively bleak were it not for its focus on Josh, the outsider that the rest of the Codys fear threaten their survival. The character's arc from innocence and fear to wariness and anger is rendered by talented newcomer James Frecheville with the same kind of intelligent subtlety that distinguishes Michôd's filmmaking. Though its larger metaphor of the Codys as a miniature "animal kingdom" may be a bit too on-the-nose, the execution thankfully invites you to feel your way into this cruel world. Against all odds, Michôd's vision manages to get under your skin. 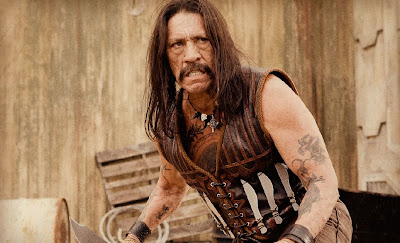 Though this feature-length extension of Rodriguez's opening fake Grindhouse (2007) trailer has a few inspired moments of exploitative ultraviolence—where else are you going to see someone swinging out of a window holding onto a guy's intestines?—mostly it features the same kind of deadening self-consciousness that made Planet Terror, Rodriguez's half of the Grindhouse double-bill, as monotonous as it was outrageously violent. In such a context, it's not much of a surprise that the film's pro-immigration social commentary, however deeply felt it may be on Rodriguez's part, barely creates much of a stir except as window-dressing for the blood, guts and sex. 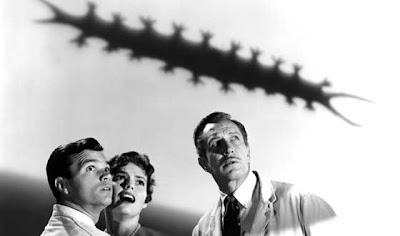 All throughout this past weekend, Film Forum—as a culmination of its recent William Castle series—screened Castle's 1959 film The Tingler with his original theatrical gimmicks intact. In this case, that meant "Percepto"—in which select seats in a theater were wired with a buzzer to simulate the titular creature's effect on one's spine while in a state of extreme fear—and "Psychedelorama"—a riot of colors projected onto the screen during the main character's scientifically minded experiment with LSD. Alas, I was not one of the lucky few who got buzzed by "Percepto," but the gimmick was effective enough: By not knowing which seats were wired, the moments in which The Tingler figured prominently gained mounting tension in ways the film might not have contained without it.

That is not to say that The Tingler doesn't have its points of interest without the gimmicks. The film's premise—revolving around a creature that grows in all of us when we become especially scared—is mined for a delicious meta-movie exercise, climaxing with the image of The Tingler interrupting a screening of Henry King's 1921 silent Tol'able David and literally crawling across our screen. Scary? Not really. But delightful? Absolutely! If nothing else, that William Castle was quite the showman. 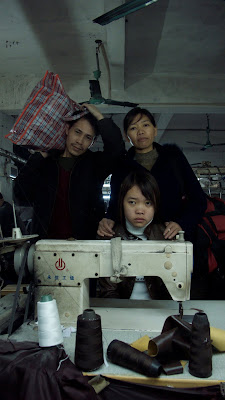 The intimate nature of Lixin Fan's documentary is deceptive. By following one family that is ultimately torn apart by (what else?) China's recent attempts to globalize its economy and modernize its society, Fan manages to touch on a subject broader in scope: the tragic generational gap that results from these changes, and the damage they end up inflicting on the family unit. Thus, the mother and father of the Zhang family—both of whom, as it the case with 130 million other migrant workers, barely see their children except during the Chinese New Year—desire a better future for their kids; while the older daughter Qin rebels against their well-meaning intentions, resentful of their absence and desiring to discover a path for herself, not one dictated by two parental figures she barely knows.

Does that dilemma sound somewhat familiar to readers of this blog? Except for the "parental-figures-she-barely-knows" part?

Putting aside personal identification, however, the beauty of Last Train Home lies in both Fan's humane evenhandedness in his observation of the members of this family and the low-key visual beauty with which he captures this world and these complicated emotions. Fan's generosity even makes room for a chilling fourth-wall-breaking moment in which Qin, in the midst of a heated family argument, looks straight at the camera and yells, "You want to film the real me? This is the real me!"—a moment that is, frankly, more viscerally devastating than any of Jia Zhang-ke's plays with illusion-versus-reality in his fiction-doc hybrid 24 City (2009). 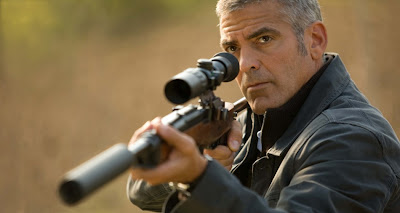 People are comparing this slab of tedium to Jean-Pierre Melville's late existential thrillers? Just because it's quiet, moody, spare and all that?

The thing about Melville's emotionally reserved characters is that, by denying us much backstory and observing them completely in the moment, Melville somehow brought us closer to these seemingly detached people, allowing us to draw conclusions about them from their facial expressions, their movements, their manner. In other words: Characters like Le Samouraï's Jef Costello usually carried an aura of mystery about them, one which Melville, with his love of genre and lack of sentimentality, exploited to masterfully hypnotic effect.

Alas, there isn't a whole lot of mystery surrounding the main character of The American, and there isn't even much of an animating love of genre—but there's certainly a whole lot of sentimentality underlying its self-serious demeanor. Actually, it becomes pretty obvious early on what troubled emotions lie underneath George Clooney's generally steely exterior (the film's prologue—in which he is forced to shoot a lover in the head—provides a big clue), which makes much of the rest of this European-style art-film exercise more draggy than hypnotic. And director Anton Corbijn, as film critic Michael Sicinski adeptly points out, never really does much with the Italian countryside settings other than make pretty picture-postcard shots out of them with cinematographer Martin Ruhe—unless, instead of Melville, Corbijn was aiming to evoke Antonioni's penchant for framing small human figures against vast landscapes? In which case: Nice try, but Antonioni made his wide shots as unnerving as they were beautiful, a tricky combination Corbijn is never able to pull off.

I suppose I should admire The American more than I do for being just about everything most American movies this summer have not been: slow, reflective, serious, thoughtful. But in this case, I'd just be damning it with faint praise. Corbijn may stylistically be derivative of the "right" filmmakers, but it's still awfully derivative, with nothing personally distinctive brought to the table. 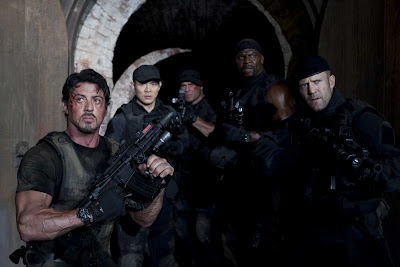 Based on its cast of action-genre has-beens and newcomers, Sylvester Stallone's latest auteur piece promised to be something of a throwback to gloriously absurd and ultraviolent brainless macho bloodfests of the '80s like Rambo: First Blood, Part II (1985), Commando (1985) and the like—to which I said, without shame, "bring it on." Alas, The Expendables isn't really smart enough to follow through on the suggestions of depth one glimpses now and then—Mickey Rourke's tearful Bosnia reminiscence; Eric Roberts's climactic speech to Stallone about how soulless they both are, deep down—and it's certainly not technically competent enough to make the action sequences anything more than barely watchable feats of (by now standard) ADD editing, spatial incoherence and noise. (It's a bad sign when I couldn't even tell it was Randy Couture battling Steve Austin towards the end until about halfway through their fiery scuffle.) Also, this particular Asian-American couldn't help but get just a little pissed about what Stallone did with Jet Li: basically emasculating him until he gets one big martial-arts fight with Dolph Lundgren...and then emasculating him again by depriving him of the victory he was on the verge of achieving! (But then, what would you expect of a filmmaker who names his sole Asian character "Ying Yang"?)

In short, The Expendables turns out to be just another brain-dead summer action spectacle. That's not to say I didn't entirely get my money's worth, however. Some of the male-bonding humor did make me laugh a few times; Stallone and Jason Statham do some fine work together. And Stallone's three-character church scene with Bruce Willis and Arnold Schwarzenegger is a hoot. Three of the biggest action stars of the '80s verbally sparring in one location? (Yippee-kayyay, motherfucker!) If only the rest of the movie had been as cleverly self-aware.


***
There are a few other movies I've seen recently that I could say something about: the so-so Angelina Jolie action machine Salt (2010); the still-majestic Patton (1970), seen for the first time on a big screen in glorious 70mm.; the brutal psychodrama of John Cassavetes's Faces (1968), seen for the first time ever on DVD. But I really should probably do some packing, shouldn't I?
Posted by Kenji Fujishima at 9/08/2010 12:01:00 AM