NEW YORK—On Monday, I picked this up at Lincoln Center: 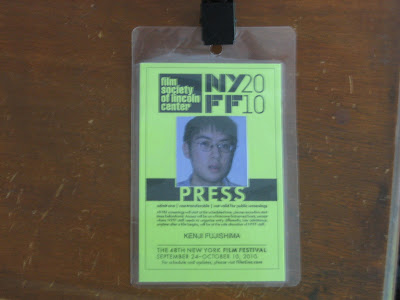 There it is, folks: my first film-festival press pass ever (and hopefully not the last one I'll ever get!)

Don't I look all professional in that photo? (Actually, don't answer that...)

Starting tomorrow, and within the next four weeks, I will be covering this year's New York Film Festival (running from Sept. 24 to Oct. 10) for Slant Magazine's blog offshoot The House Next Door. That is where you'll see my dispatches—and maybe I'll find some time to pool some of those initial impressions on this here blog, especially for films I see that I am not covering.

I've never covered a film festival before, but I've been told that this is a far more relaxed kind of festival than, say, the ongoing Toronto International Film Festival (which I hope to one day attend, after plans to do so this year fell through). Hopefully, then, I'll be able to handle the pressure of pooling my impressions in a reasonably timely manner. (I'm not the only one covering the festival for The House, so I'll have some help in that regard.)

Besides: Isn't that the kind of pressure that actual journalists have to deal with day-in and day-out? (Hey: If I can pull this off, anyone want to hire me to cover film festivals full time? Anyone?)

So if substantive blog updates here at My Life, at 24 Frames Per Second are sparse in the next few weeks...well, that's why. But, of course, I will link you all to my House Next Door posts as soon as they go up.

Wish me luck! I'm looking forward to whatever discoveries, pleasurable or not, await me in the next few weeks of film-festivallin'.

P.S. I know, I know: I haven't written much about my big move to Brooklyn this past weekend. Short version: I encountered the usual stresses, but overall it went pretty well; now I'm just trying to get myself all settled in, not to mention comfortable with the idea of living on my own. Longer version of that to come...eventually.
Posted by Kenji Fujishima at 9/15/2010 06:00:00 PM

Email ThisBlogThis!Share to TwitterShare to FacebookShare to Pinterest
Labels: blog housekeeping, New York Film Festival 2010, photos I've taken, photos with me in it

Enjoy it, Kenji. It looks like an interesting slate, with a few films I'm excited about seeing at the London Film Festival as well as a couple (The Tempest; Tuesday, After Christmas) that I was disappointed not to see in the LFF schedule. I'll look forward to reading your updates.

Alas, because of the pesky fact that I have a day job, I have to try to negotiate New York Film Festival coverage with my work schedule. Thus, I won't be able to see/write about all this year's Main Slate films. I will try my best, though! (That work schedule is so far preventing me from being able to see press screenings of Tuesday After Christmas, Uncle Boonmee Who Can Recall His Past Lives and Certified Copy among other heavy-hitters; I'll see what I can do to try to catch 'em during this year's festival, however—even if I have to pay money to see 'em.)

Think you'll be able to catch Godard's latest? I'm ever so curious to know if Socialisme really is as dull and uninteresting as everybody keeps saying it is.

The Godard I will be able to make, barring any unforeseen circumstances.

Kenji -this is off-topic, but I noticed your tweet about the Mahler Sixth at the NY Phil. You can get a ticket for $27.50, in the rear orchestra, by calling 212-875-5672, aksing for Jamie Carr and saying you are a member of the Mahler Society of NY. You can mention my name too. Hope this helps...Paul Stumpf

Whoa, that really is off-topic, Paul...but the tip is appreciated! If I was to do that, would I only be able to get a ticket for myself at that price, or would I be able to get two (if, course, any of my friends expressed any interest in accompanying me)?

Kenji - you can certainly get two tickets, probably up to four. Glad to pass this along, even though it's not the right forum for it:)
Paul