BROOKLYN, N.Y.—A new week of New York Film Festival press screenings beckons (and I started it off with a really good one this morning, which I discuss below). Alas, with a couple of major exceptions, this week's a bit of a heartbreaker for me. Apparently, if my boss at work is out—as she is all week long—no one else under her is allowed to take time off? Well, that's exactly what happened when I asked about which weeks I could take off to attend these press screenings—and this, it turns out, is the week that some of my most eagerly anticipated movies are screening for critics: Apichatpong Weerasethakul's Cannes Palme d'Or-winning Uncle Boonmee Who Can Recall His Past Lives, Radu Muntean's Tuesday, After Christmas and Abbas Kiarostami's Certified Copy chief among them. My caveman-like way of expressing my frustration: Aaaaarrrrrgggghhhh!!!!!

Well, at least I have David Fincher's The Social Network and Jean-Luc Godard's Film Socialisme to look forward to on Friday (my usual day off). And next week and the week after that, I was able to get the appropriate days off, so I will be able to see stuff like Cristi Puiu's Aurora, Charles Ferguson's new documentary Inside Job, Mike Leigh's Another Year, Kelly Reichardt's Meek's Cutoff (which received rapturous praise from Toronto International Film Festival attendees—possibly a good sign, considering how little I thought of her last film, Wendy and Lucy) and this year's Closing Night film selection, Clint Eastwood's Hereafter. And I may end up trying to see at least one or two of the aforementioned ones I'm missing at public screenings, if I feel like spending the big bucks or taking chances on rush lines in order to get half-price tickets. 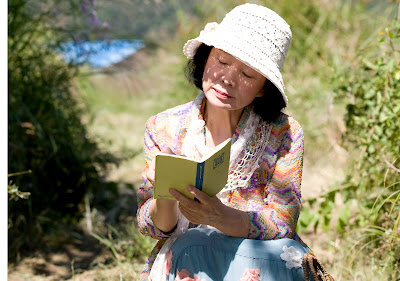 The title of Poetry, the latest film from South Korean filmmaker Lee Chang-dong, is rather misleading. Yes, it is partly about the process of literary creation, following as it does the struggle of the elderly Mija (Yoon Jeong-hee) to find "poetic inspiration" for a poetry class she, at 66, has decided to take. But, if it's actually about that abstract concept of "poetry" at all, it's about the universal difficulty of finding beauty in our modern world. Don't let its stateliness deceive you: This is, at heart, a deeply angry and frustrated picture—though ultimately not a cynical and despairing one.
When Mija is all set to open herself to the world around her, she receive a tragic shock to her system: Her grandson, Wook (Da-wit Lee), has been identified in the diary of a girl who recently committed suicide (and whose corpse is seen floating in a river in its opening scene) as among six children who repeatedly raped her in their school's chemistry lab over the course of many months. Mija finds herself reluctantly roped into the boys' fathers' desperate attempts to persuade the parents of the deceased to not sue them. As she attempts to handle the stress of trying to spare her grandson from jail, she is also forced to deal with the discovery that she is suffering from the early stages of Alzheimer's. All of this throws her optimistic, happy-go-lucky worldview for a serious loop; her newfound attempt at poetry, is, then, her way of making sense of a world, and possibly a life, turned upside down.
This sense of jarring dislocation is rendered with the kind of patience and delicacy Yasujiro Ozu regularly practiced in his domestic dramas; Poetry abounds in long takes that frame Mija amidst the environment surrounding her—observing that environment as much as Mija herself tries to do, while also visually contextualizing the world outside of her purview. And yet, dark and unsettling currents seethe underneath the surface serenity. One can't fail to notice, for instance, the callousness with which the boys' fathers try to sweep their sons' wrongdoing under the rug; more personally devastating to Mija are the kinds of compromises she is forced to make in trying to keep herself and her grandson afloat, even to the point of finding herself having to fuck a stroke-ridden old man to which she is employed as a maid (thankfully, this doesn't play nearly as outrageously as it sounds). With all this thrust onto her plate, it is no wonder that she has trouble finding that "poetic inspiration" she so desperately seeks. And as events boil to a head, one begins to wonder if, in a world in which self-interest seems to reign over human empathy, it is even possible to find the type of beauty in the everyday that Mija's poetry professor preaches to his students.
But the film finally, transcendently, ends on a note that suggests that that precious ability to look into the heart and soul of another holds the key not only to creating art, but also to negotiating the challenges of living in this cruel, messed-up world. Such empathy doesn't preclude the possibility, however, of having to make hard moral choices. That is all I will say about the film's ending; for now, I will just note that rarely does Lee force any of these themes on us; instead, he somehow manages to let it all hover over the whole film in a way that every once in a while truly carries, yes, the hazy, sublime elusiveness of a work of poetry.