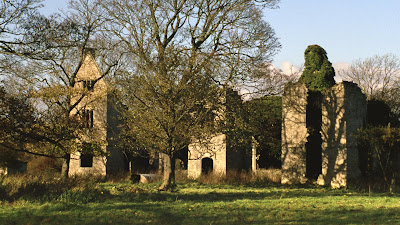 One thing I'm looking forward to in this year's New York Film Festival is a chance to introduce myself to some of my blind spots in current cinema; avant-garde filmmakers like James Benning and Phil Solomon constitute some of my biggest ones. (It's probably as good a time as any here to give credit to the wonderful film critic Michael Sicinski for introducing me, through his writing, to many of the bigger names in the avant-garde film scene.) In general, I haven't dealt as much with experimental cinema as I would like, and this year, with the festival's annual Views from the Avant-Garde program, I have an opportunity to get a bit of a taste.

I'm not sure if Patrick Keiller's documentary/cine-essay Robinson in Ruins (2010) is considered avant-garde—but it is certainly more formally adventurous than most documentaries I usually see (including a film I saw this morning, LennonNYC, which, aesthetically speaking, fully embraces the conventional Ken Burns-like talking-heads mode, and which I will be writing about for The House Next Door as my next dispatch). Its style also threw me for a loop early on, and so I spent much of the rest of the film feeling like I was playing catch-up; by the end, I still didn't quite feel like I had fully caught up. But I'm fascinated enough by what I think I get out of it that, if the film does get a theatrical release here in the U.S. outside the festival, I will certainly be willing to take another crack at it, in addition to catching up with Keiller's earlier work beforehand.

Anyway, my initial attempt to grapple with it is up at The House. If nothing else, the film has what may be my favorite shot of the year to date, which I mention in the piece. It involves a spider and the global financial crisis. That is all for now.
Posted by Kenji Fujishima at 9/22/2010 01:00:00 PM