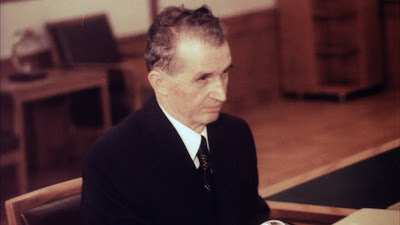 In my first dispatch from this year's New York Film Festival, I tackle Andrei Ujicâ's conceptually intriguing three-hour documentary The Autobiography of Nicolae Ceauşescu (2010) and the new 35mm restoration of Nuremberg, Stuart Schulberg's film of the Nuremberg trials in 1945 and '46. Both of these are showing as Special Events at this year's festival—and, though problematic and very, very slippery, Ujicâ's film is ultimately worth checking out and having an opinion on, I think. (If anyone in New York is interested in seeing Nuremberg, one could probably wait 'til its scheduled weeklong run at Film Forum later this month.)

Enjoy! (New York Film Festival screening info for The Autobiography of Nicolae Ceauşescu is here; for Nuremberg, here.)
Posted by Kenji Fujishima at 9/19/2010 10:15:00 AM