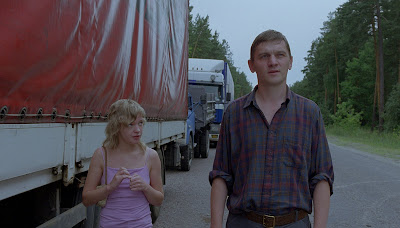 An opening scene of a couple of people dumping a corpse into a hole and burying it in cement dispels expectations early on that Sergei Loznitsa's My Joy (2010) will actually live up to its title. Instead, this is yet another one of these grim—and, in the mode of other recent Russian dramas like 4 (2005) and Cargo 200 (2007), bleakly amusing—mazes of miserablism about the evil that men do, the self-interest that allows people to stand by while unspeakable violence is committed and the corruption at the top that seems to trickle down into their underlings. That Loznitsa's film is structurally daring—the film is boldly free-form, with a jarring shift midway through that transforms a road movie into a series of barely related episodes—and shot (by Oleg Mutu, best known for his work on the 2007 Romanian film 4 Months, 3 Weeks and 2 Days) in beautifully lit and choreographed long takes, isn't enough to distract us from the fact that My Joy—despite a promising first hour that suggests a genuine curiosity about the world, and the people who reside in it, on Loznitsa's part amidst the morass of inhumanity—is ultimately pretty thin, shallowly misanthropic stuff. This is one grueling and eventually monotonous road to nowhere.
Posted by Kenji Fujishima at 9/23/2010 09:00:00 PM