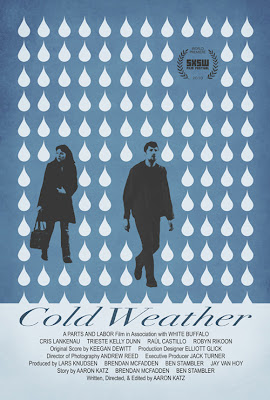 Tonight at 9:30 p.m. at the Brooklyn Academy of Music, Cold Weather (2010), the as-yet-unreleased third feature by independent filmmaker Aaron Katz, is screening for a second time at the ongoing BAMcinemaFEST (sponsored by my place of employment, The Wall Street Journal). I saw it at its first screening during the series, on Saturday evening, and while I can't say that this is my favorite of Katz's three features to date, it shows arguably the most distinctive of the so-called "mumblecore" filmmakers going outside of his comfort zone with an audacity that, at the very least, is quite entertaining.

For those who have seen Katz's previous film Quiet City (2007)—a wonderfully romantic and visually poetic account of the stirrings of love between two wandering twentysomethings in New York, and a movie that pretty much hits every single sweet spot in my moviegoing soul—Cold Weather begins comfortably enough. Though the dominant mood of its opening half hour is more downbeat than in Quiet City, Katz's sympathy for his drifting characters—particularly Doug (Cris Lankenau), a former forensic-science major and Sherlock Holmes-wannabe who has decided to drop out of school and return home to live with his sister in Portland, Oregon, where he finds himself working in an ice factory to pass the time—is recognizable, as are the realistically halting rhythms of their interactions and Katz's penchant for alternating between scenes of fly-on-the-wall observation and expressively framed images of quiet beauty (with cinematographer Andrew Reed once again doing some handsome DV lensing). So far, so evocative.

Halfway through, however, Cold Weather suddenly turns into a full-blown mystery tale, complete with codes, puzzles and revelations—as if tracking down Doug's ex-girlfriend Rachel (Robyn Rikoon) after co-worker/friend Carlos (Raúl Castillo) informs him in a panic that she has mysteriously disappeared from her hotel room finally gives Doug a purpose in his life. And Katz clearly wants us to be aware of the tonal shift: mostly forsaking the patient long takes in the first half, he shoots and edits the second half more or less like a suspense thriller, asking composer Keegan DeWitt to turn up the heat on his score, and just generally exulting in—and playfully mocking—the genre tropes in which he dabbles.

Even in the second half, though, there are moments of warm, low-key repose between the characters, most notably between Doug and his sister Gail (Trieste Kelly Dunn) as they close in the culprit behind Rachel's disappearance. A stake-out, for instance, eventually leads Gail to divulge details of a failed relationship she had concealed from her brother. If anything, Cold Weather is about the quiet evolution of this sibling relationship, from mere acceptance to something like genuine affection. It's fitting, then, the film ends not with any final dramatic twists, but with Doug and Gail sitting in a car, Doug finding an old mixtape he once made for her and rewinding it in the car's tape player. 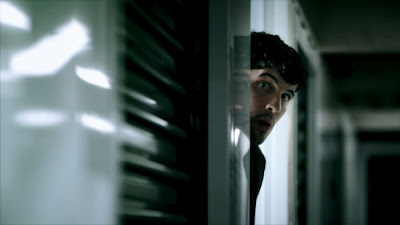 Truth be told, I'm not entirely sure, even a few days after seeing this film, that Katz's attempt to blend "mumblecore" and detective procedural wholly succeeds; if I have a misgiving about his otherwise refreshing approach, it's that ultimately the film's resonance feels a bit thin compared to the aching romanticism of Quiet City or the sense of a teenager's growing maturation in his promising debut feature Dance Party, USA (2006). In other words, I wonder if Katz would have been better off deciding from the outset to make a genre piece rather than another one of his naturalistic mood pieces, instead of coming up with this rather jarring, schizophrenic film.

Nevertheless, in hindsight I appreciate that Katz is trying to do something different from what he has done before, and I applaud him for doing so. What it lacks in the eloquence of his previous work, it generally makes up for in good-humored chutzpah, while still offering the same generosity of feeling that I treasure from his previous two films. It's also just fun to watch. Really.

P.S. After the film on Saturday, Katz and a bunch of other cast and crew members, as seen in the above photo (Katz is on the farthest right), partook in a Q & A session with the audience, and Katz revealed that, at the time of writing the script, he was obsessed with Sherlock Holmes mysteries and simply decided, one late night, to incorporate that into his script. That's the way it plays onscreen: as if the film itself had simply decided, at one point, to become a detective procedural.

I have some small doubts as to how much the shift pays off in the end. Others seem to have no problem with it. Only one way to find out where you stand...

P.P.S. Katz's first two features are available on DVD in a lovely two-disc set from the very fine independent label Benten Films. If you don't swoon at least a little bit after seeing Quiet City, then I'm not sure I wanna know you...

P.P.P.S. Here's a fun interview Katz did with Simon Abrams over at the New York Press, in which he offers up thoughts on some of his favorite action films of the '80s and '90s. Hey, he likes Renny Harlin as much as I do (though I personally still prefer Die Hard 2 over Cliffhanger)! And he likes Michael Bay's The Rock, too! Hell yeah!
Posted by Kenji Fujishima at 6/17/2010 12:01:00 AM