EAST BRUNSWICK, N.J.—My friends, I hope you all had a nice, relaxing Memorial Day weekend, while of course remembering all of our fallen soldiers while doing so.

Me, I had to work Sunday and Monday—an "occupational hazard" of working at least partly for The Wall Street Journal's international editions, and in the journalism industry in general—but, after nearly three years of doing so, I'm used to it. But my Friday and Saturday—and to a lesser extent, Sunday—were interesting enough that I figured I'd devote a couple of posts to it.

Buckle up, folks, because I'm about to go all over the place in the next couple of days or so! 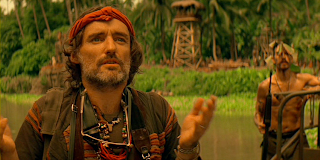 First: as a cinephile, I would be remiss if I didn't acknowledge the passing of actor/filmmaker Dennis Hopper, who died on Saturday at the age of 74 after a long bout with prostate cancer. If any Hollywood artist can legitimately be considered "legendary," Hopper is most certainly one, with a large, distinctive, richly varied body of work that evinces the kind of restlessness and iconoclasm that demands to be treasured and applauded. You certainly never knew what to expect from Hopper film by film, performance by performance—but whatever he did, he did it with utmost sincerity and commitment, even to failed ends (as with his troubled 1971 film The Last Movie).
I don't claim to have seen every performance and directorial effort of his, but while his Frank Booth in Blue Velvet (1986) is a tour de force of twisted terror; and his hippie photojournalist in Apocalypse Now (1979), from which the screengrab above derives, is vividly whacked-out—among many other memorable pieces of acting, for sure—I'll go ahead and point to his performance in that modern action masterpiece Speed (1994) as a terrific example of the kind of imagination and conviction he could bring to his work. Howard Payne, the antagonist who puts a bomb on a Los Angeles bus that spurs much of the high-intensity action in the film, would probably seem like a standard-issue action-movie villain if you were just reading his lines on a page; Hopper, however, dares to turn screenwriter Graham Yost's lines into something very close to an inspired portrait of a deeply disturbed middle-aged man with a perverse love of bombs and a demented sense of entitlement. He truly makes the role his own—and isn't that one quality that distinguishes great actors from merely serviceable ones?

Just witness the way he turns a soliloquy about the beauty of a bomb into something that sounds genuinely spontaneous and horrifyingly funny (see from 0:37 onward):

Forget John McCain; here was a true maverick. May he rest in peace.
Here's a lengthy video tribute to him, from (who else?) Matt Zoller Seitz over at Moving Image Source (you can see a written introduction to this video here):

***
We may remember Dennis Hopper more strongly now in death, but what a remarkable life he lived! Unless you believe in reincarnation or resurrection, death is death; what's left is life and how you've lived it. 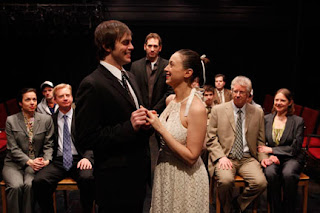 (Photo taken by Carol Rosegg)
That, of course, is one of the major themes underpinning Our Town, Thornton Wilder's Pulitzer Prize-winning drama about daily life, love, death and the eternal in an unremarkable small American town. I finally—finally—caught up with this classic Friday evening at New York's Barrow Street Theatre, where director David Cromer's acclaimed off-Broadway production has been playing. Believe the hype, folks; this production is as amazing as you have heard. Breathtakingly intimate—helped considerably by the theater's tight, small performance space—and soulfully performed, the production fully brings Wilder's formally daring and profoundly moving text to vivid life.

Our Town isn't what you'd consider an "uplifting" drama, to say the least. Its final act takes place in a metaphysical afterlife where deceased characters reflect on their own individual lives and on the nature of existence: how people live, how they choose to live, and how they choose to remember their lives. And it ends on a note that reminds us of humanity's insignificance in the grand scheme of things. Wilder isn't presenting a comforting perspective here, and its overarching metatheatrical conceit—a Stage Manager presides over the play as a God-like figure, offering thematic counterpoint to the scenes enacted by the cast and occasionally interacting with actors and audience members—only adds to the discomfort.

But Our Town, for all its bleakness and sadness, ends up being cathartic rather than merely tragic. As with any great work of art, it's the clarity and beauty with which Wilder expresses his point of view that makes it genuinely exhilarating as much as it is "depressing."

I don't think I've ever had as consistently electrifying and deeply affecting a theatrical experience as on Friday night. Go see it, if you haven't. Who knows? It may well be one of those life-changers.

Side note: With his focus on a theatrical figure and its equally ambitious exploration of life and death, I have to imagine that Charlie Kaufman had Our Town at least partially in mind when he conceived of  Synecdoche, New York. Has anyone else made such a connection in considering Kaufman's great magnum opus?


***
Coming in Part II: I sat through Matthew Barney's entire Cremaster cycle at IFC Center and lived to tell you all about it—right before Our Town! Plus, a less-than-positive Sunday evening. It has something to do with my car. Yes, again.
Posted by Kenji Fujishima at 6/01/2010 12:01:00 AM