Memorial Day Weekend Round-up, Part II: ...and Everything in Between 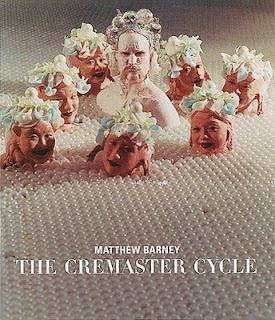 Our Town begins with life and ends with death. So, in its extravagantly fantastical way, does Matthew Barney's five-film Cremaster cycle, at least if seen in numerical order and in a single sitting. That, my friends, is the way I finally saw this much-discussed work of modern art over at the IFC Center on Friday just before diving into Grover's Corners. Quite a contrast, I must say! 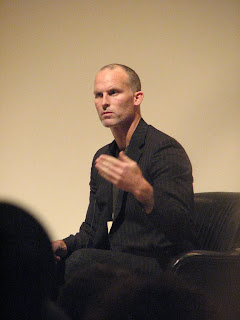 It was about a decade ago when The New York Times published a feature story calling Barney "the most important artist of his generation." Oh, how popular opinion can change over 10 years! These days, it seems among a majority of people I read/follow on Twitter that Barney is taken far less seriously than he apparently used to be. (For instance, one of my Twitter friends called the Cremaster films "pretty...pretty vacant.") Having never seen a single frame of his film work before settling in on Friday morning for a full day of Cremaster-ing—the IFC Center has been presenting all five films in three separate admissions; its run will end Thursday, June 10—I approached the cycle the way I usually approach artworks that inspire sharply divided opinions: with utmost curiosity. Where would I stand on the "Matthew Barney: artist or fraud" discussion?
So where do I stand, now that I have seen the Cremaster cycle in its entirety? Well...I think I understand where the detractors are coming from, but, in spite of some reservations, overall I am impressed by the fearless extravagance of visual imagination on display and by the staggering scale of the whole.
I think the best way to approach the Cremaster films is to take them as spectacles of the mind, feverish looks into one artist's personal obsessions. What obsesses Matthew Barney? To put it somewhat crudely: sex and death. 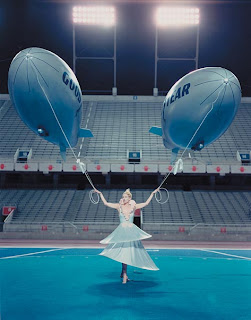 The cycle begins with a birth. Cremaster 1 (1996) could possibly be described as a 40-minute Busby Berkeley song-and-dance number that is simultaneously about the creative process leading up to said song-and-dance number, cutting as it does between chorus girls performing for an empty football stadium (in this case, Bronco Stadium in Boise, Idaho) and two Goodyear blimps overhead featuring hostesses guarding two women hidden under a table, one in each blimp. These two women, sporting little more than lingerie, poke holes in the white tablecloths above them in order to get at grapes on the surface. The fact that the tables feature sculptures of female reproductive systems suggests what Barney is trying to metaphorically depict: the beginnings of a musical number gradually being willed into creative being. The white décor of the blimps, furthermore, are designed in a manner that reminds one of the awakening of the passengers of the Nostromo in Ridley Scott's Alien (1979), another famous allegory of birth and sexuality.
Later installments likewise feature such powerfully sexual imagery: vaginal penetration early on in Cremaster 2 (1999), a satyr grinding through sticky white mud underground in Cremaster 4 (1995, the first in the series to be shot), and so on. But, if the beginnings of life obsess Barney, so does an awareness of life's end, evidenced obliquely in Cremaster 2—with its inclusion of notorious serial killer Gary Gilmore as a character, for one thing—and seen most explicitly in Cremaster 5 (1997), which features a dubbed Ursula Andress singing an aria in an empty opera house in Budapest and apparently dwelling on the end of a love affair. 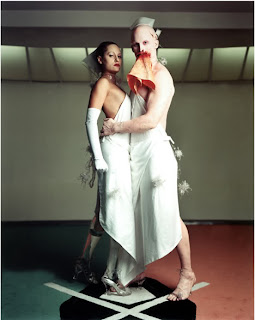 The pièce de résistance of the cycle is surely Cremaster 3 (2002, the last to be filmed). At just a little more than three hours, it is easily the longest of the series, but it has the epic scale to back up its length. There's a narrative of sorts to this one: it essentially details one man's attempts to scale both the Chrysler Building and the Guggenheim Museum in New York. But that one-line plot summary doesn't even begin to describe the density of this installment: its mythological atmosphere, its engagement with popular iconography, its visual fascination with destruction and reconstruction. Though less cosmic than Stanley Kubrick's 2001: A Space Odyssey (1968), Cremaster 3 tells a similar tale of man attempting to rise above his own limitations; in this case, though, Barney's hero achieves a much more mundane victory: male potency. Fitting, of course, that these films derive their name from that of a muscle that raises the testicles when sexually aroused; in its own high-minded way, the Cremaster films are all explorations of machismo, whether expressed as sex fantasies, violence or feverish grand opera.
Whether that is a worthy subject for exploration, especially in the course of a five-film, seven-hour cycle, is, of course, up to the viewer to determine for his- or herself. Maybe it's just the subject matter that puts some people off; a male artist's obsession with his own manhood may be considered less worthy of serious analysis by those who demand that art engage with the wider world outside of an artist's purview to be worth anything (though I would submit that Nos. 2 and 3—the highlights of the cycle, for my money—do indeed gesture toward a world outside of Barney's manly mindset). Or maybe some are thrown off by the art-installation feel of some of the films in the cycle. 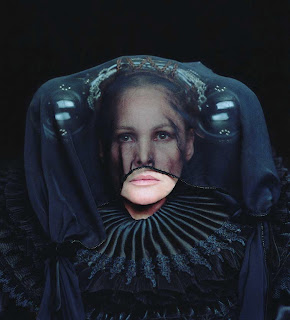 I won't lie and say that I was gripped by every single minute of the Cremaster cycle. For every moment of awe-inspiring cinematic inspiration, there are as many moments where the initial fascination of an idea soon gives way to the tedium of seeing that idea play out in slooooow motion. Nos. 4 and 5 are most egregious in that regard, though maybe that had to do with fatigue setting in after sitting through the Brobdingnagian No. 3. It's possible that, in the earliest installments filmed—Nos. 4, 1 and 5, in that order—Barney still considered himself a visual artist first and filmmaker second; those early films play more like lifeless art-museum tableaux than motion pictures. Only by Cremaster 3 did Barney finally master a palpable sense of cinematic rhythm and storytelling, which is why, in spite of its three-hour length, it ultimately feels far more eventful than, say, the inert 55 minutes of Cremaster 5.

But hey, what was it that Rossini said about Wagner's operas? That he "has great moments but dull quarter hours"? So it is with Matthew Barney's Cremaster cycle. Longueurs and all, once you get to the end of Cremaster 5 and grasp the life-and-death arc Barney has imposed on this set of films, the whole of the Cremaster cycle adds up to more than the sum of its parts. And ultimately I think it's worth trying to take in all the films in order, in one sitting. By the end, you've witnessed and, most importantly, felt in your gut something approaching an entire artistic life in miniature.

It may not change your own life or worldview the way Our Town might, but at its best, it still plays as a tantalizing epic fever dream. I, for one, am glad I got to experience it, and would certainly urge anyone interested to see it if it plays near your area. (Keep your eyes out for it, because Barney says he isn't releasing this on DVD...although a selection of Cremaster 3 was released on DVD, for some reason.)

In the meantime, see if this trailer tantalizes you:


***
Though the Cremaster cycle may not abound in what one would normally think of as "humanity," no matter: I made up for it not only in Our Town, but in the next couple of days as I hung out with a bunch of local and New York friends, one of whom I had not seen since college. I find it gratifying to work in that kind of social time along with my art-consumption time; life can't be all about movies! (Or can it...?)

I also "met" with someone on Sunday evening in a far less pleasant way: by hitting his car.

This wasn't a major accident, by any means. I was wearing my Bluetooth handset and was carrying on a conversation with a friend, and as I was pulling out of a street parking spot, I heard a car right behind me beep as he passed me by. Then I heard the sound of a collision. Turns out, I scraped the rear right wheel of the male driver's car and thereby created a dent in my own front bumper. Despite the minimal damage—there was more of it on my car than on his, as far as I could tell—the other party called the police and we ended up having to wait for about an hour before a policewomen (a relaxed and friendly one, thankfully) showed up.

Getting into an accident is never pleasant, of course, however major or minor. But this incident is merely a continuation of a string of misadventures behind the wheel that I've gotten myself into over the years. Running through a red light while half-asleep; getting pulled over for "improper emerging from a driveway"; getting my car towed during a snowstorm in New Brunswick while I was in New York; hitting a car and then driving away when I didn't see anyone pull over: oh, I've gotten myself into some real serious shit on the roads, and I still am at a loss to figure out why. Am I a far worse driver than I think? Am I in denial about how careless and accident-prone I apparently am? Despite my problematic record, I always thought I was one of the better drivers out there (my father speeds far more than I do, seriously); maybe I'm just not.

It's almost enough to get to consider just not driving altogether. Good luck, though, getting around in New Jersey without a car!