Weekly Musical Discoveries: Joanna Newsom's Have One On Me 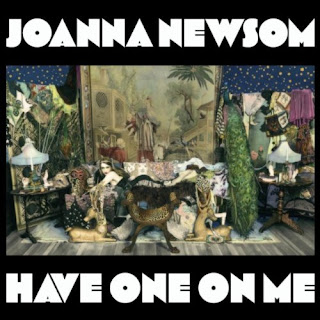 I have a bit of a weakness for a certain kind of work of art: the type of imperfect work that may not entirely add up, but which takes so many risks that, if I ultimately end up liking it simply on the basis of its ambition, I'll usually prefer them to more "perfect" works by the same artist.

So while, sure, I'll recognize that Revolver (1966) or Sgt. Pepper's Lonely Hearts Club Band (1967) are consistently great works, the stylistically-all-over-the-place two-disc White Album (1968) will always loom larger in my mind. Same for, oh, Hüsker Dü's sprawling punk-rock epic Zen Arcade (1984) over their more concentrated New Day Rising (1985). Or, in the movie realm, it's a case of preferring, for instance, the messily operatic fervor of Paul Thomas Anderson's Magnolia (1999) over the more controlled (and to my mind thin and overblown) chaos of There Will Be Blood (2007).

Indie folk songstress Joanna Newsom's most recent album, the three-disc behemoth Have One On Me (2010), fits squarely in this "imperfectly perfect" realm, though it may be the quietest musical epic you've heard. It is also, I think, her best album yet.

(Photo credit: Annabel Mehran)
To be honest, I was put off by the relentless whimsy of her 2004 debut The Milk-Eyed Mender, recognizing her lyrical smarts and finding the music pretty, but feeling profoundly indifferent to her apparent obsession with antiquity. (That's nice, Joanna, but do you have something to say about our time in exploring the olde days?) Then her song structures became more complex and interesting in her 2006 follow-up Ys, somehow making said whimsy more palatable (either that, or I had just gotten used to it). Now, in Have One On Me, she has, for the most part, dropped the whimsy altogether to more directly address the romantic fears and desires stirring in her heart, while not stinting on the experimental song structures.

The result is some of the most purely beautiful music she has ever created and performed. The beauty isn't just in her lyrics, which somehow feel more concrete than before without sacrificing their sense of poetic elusiveness; Newsom's incredibly delicate and vulnerable singing also takes one breath away. I was never particularly bothered by the feyness of her voice in her previous two albums; the girlishness was nothing if not wholly appropriate to the childlike whimsy of her words. On Have One On Me, she mostly sounds more "normal" in her tone and inflections, befitting the more "normal" lyrical content. But she's no less hypnotic; if anything, she sounds more genuinely expressive here than she has before, and not merely affected.

I could go on, but I think I'll let possibly my favorite cut from the album, "Baby Birch," speak for itself:


Perhaps Have One On Me is too long and self-indulgent. Perhaps not every single tune is memorable. But in the face of music of such melting serenity—a mood that carries it through even less inspired cuts—I find it difficult to complain too loudly. When it comes to art, I'll take passion over perfection just about every time.
Posted by Kenji Fujishima at 6/22/2010 12:01:00 AM