EAST BRUNSWICK, N.J.—Last night, Detroit Tigers baseball pitcher Armando Galarraga took the mound about a week after that by-now infamous perfect game made imperfect by a bad umpire call. The controversy over the incident has died down considerably since that Wednesday night, so what I'm about to say may be considered past its sell-by date at this point. No matter; I'm saying it anyway.

But first, a refresher:

One of the few vivid memories I have of first grade is of crying a lot in the classroom: Whenever I made a mistake in class, I almost always shed tears in droves. To this day, I can't really pinpoint why this was the case; in general, I was slow to develop compared to others in my age group, so perhaps that was just an extreme manifestation of my immaturity. But while I've obviously become far less of a special case in that regard—these days, when I make mistakes and feel the sting of it, I simply grumble obscenities under my breath, out of earshot—I sometimes still feel that same fear of making the big mistake, of being wrong in a big way. Such a fear that can be irrationally paralyzing at times, hobbling even my ability to come to a quick decision, leading me instead to agonize over even as trivial a decision as whether I should go ahead and buy something or not.

I was reminded of this last week in wading through the fallout from umpire Jim Joyce's botched first-base call to rob Galarraga of a perfect game last Wednesday night. After the moment happened, people on Twitter and Facebook immediately lit up, with many not only bashing Joyce for his epic blunder (and applauding Galarraga for his sportsmanship), but also calling for Major League Baseball to overturn the bad call and to even consider finally bringing instant replay into the mix.

I admit, I initially partook in the pilings-on; amidst all the electricity generated by the outrage, how could you not? And while, in hindsight, I accept MLB Commissioner Bud Selig's decision to keep the call as it was—you overturn this one call, and you'd have to overturn all sorts of other faulty calls made in the past and other ones that will surely be made in the future—I still stand by my belief the league could stand to at least consider getting with the times and bringing instant replay on board. 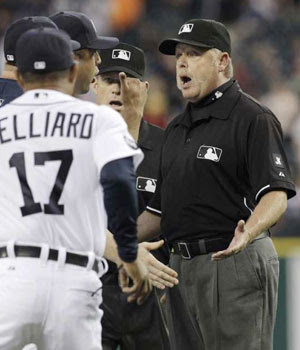 (Photo credit: Paul Sancya/AP)
As for Jim Joyce, though...well, once the hysteria over the botch subsided, I tried to put myself in his shoes the moment he made that big mistake. History was being made that night at Comerica Park, and Joyce surely knew it, deep in his gut. He was watching it unfold in front of his eyes; he had better than a front-row seat to the action. Up until that fateful call, this pitcher Galarraga had retired 26 Cleveland Indians hitters in a row, walking none; now here comes potential Out No. 27 in Jason Donald. So Donald hits a ground ball to Tigers first-baseman Miguel Cabrera, and he flips it to Galarraga, who has hustled over to first base and is now covering the bag...

...and what was going through Joyce's head the moment he called Donald safe at first, even though video replays irrefutably showed that Galarraga had indeed covered the base before Donald stepped on it? Obviously, I can't be entirely sure, being that I'm not a big-league umpire and all...but maybe, in his desire to be sure he absolutely made the right call in the moment, that fear of getting it wrong led him to indeed get it wrong in a big way. A self-fulfilling prophecy, in other words.

I've been there, my friends—not on that big a scale, perhaps, but still, I know that momentary fear quite well. How many times, for instance, have you looked at a test question and got an inkling that you knew the correct answer, but then decided to go with another answer because doubts about your first instinct held you back? And how many times has it turned out that your first instinct was indeed correct? I, for one, have allowed this to happen countless times, and have a strong feeling it will happen again, somehow.

All of this is my way of saying: Yeah, Jim, you screwed up. Big time. But...well, I suppose I can't say I understand, but I think I have enough experience in somewhat similar situations to be able to empathize.

As far as I'm concerned, there are no goats in all of this, really—only human beings. And human beings ended up handling this situation with laudable compassion. Jim Joyce fessed up to his error and made known his deep regret over it, and a day later, Galarraga embraced Joyce even after the major officiating error. 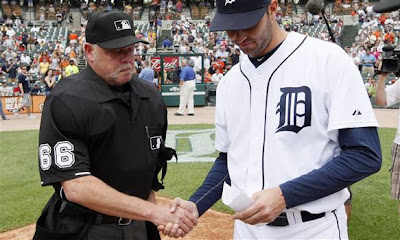 (Photo credit: Paul Sancya/AP)
I don't know about you all, and maybe I'm making too much out of this...but I see people acting kindly to one another in this manner—even when you might expect at least one of them not to do so, for understandable reasons—and it reminds me of why, despite all sorts of historical evidence telling me I should possibly think otherwise, I refuse to embrace misanthropy as a way of viewing the world.
Posted by Kenji Fujishima at 6/09/2010 12:30:00 AM

Great piece, Kenji. I was surprised and deeply moved by Joyce and Galarraga's conduct following the controversy. Frankly, it took a lot of guts for Joyce to return to Detroit the next day (after he was offered a chance to sit out the game). Like you, when I was younger I always got angry and frustrated at myself whenever I did something wrong. At others too. Lately, though, I've come to realize that it's important to give people permission to make mistakes. That it's a boon to creativity. That it helps us grow.

Honestly, I still have a tendency to beat myself up emotionally whenever I feel I've erred in some significant way. It's a tendency I try to fight, however, for the reasons you cite—because, as many have said, you can learn a lot from your mistakes. Sometimes, they are indeed worth making.

Not sure whether that would necessarily apply to Jim Joyce in this case; I can't imagine he feels like that's a mistake that was worth making. But he messed up, and he was at least humble enough to own up to it. I'm not sure how many umpires or officials would even have bothered to go out in public and do what he did—and frankly, I'm not sure how many players would have reacted to it the way Galarraga did.