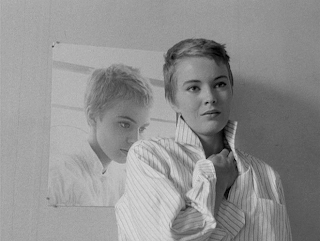 Another Godard film on the big screen, another revelation!

Can you believe that it's been 50 years since Godard's Breathless—with the help of François Truffaut's The 400 Blows and Alain Resnais's Hiroshima, Mon Amour, both from a year earlier—ushered in the trailblazing French New Wave movement and, with the full force of gusty winds of restless innovation, more or less changed the way we look at movies? For the occasion, Rialto Pictures has released a new 35mm restoration of the film, playing through Thursday at New York's Film Forum. I went to see it there on Saturday...and not only is it as exhilarating an experience as it ever was, but in some ways I think I can honestly say that I felt like I was seeing it afresh.

Sure, having seen the film twice before on DVD, I was already well acquainted with its jump cuts, its Tradition of Quality-subverting documentary style of Raoul Coutard's cinematography, its obsession with American genres, its daringly distended second-act hotel-room seduction, and its cool and playful tone. All of that was as familiar to me as, say, a mural I couldn't help but stare at for hours on end.

What really struck me about Breathless this time around, however, is just how appropriate its title really is, in more ways than one. 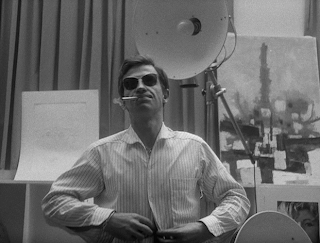 In French, the title is À bout de souffle, which is perhaps more accurately translated as "out of breath." On a literal level, this translation makes sense considering the ennui that eventually befalls its protagonist, Michel Poiccard (Jean-Paul Belmondo); by the end, as he realizes his American lover Patricia (Jean Seberg) has betrayed him, he verbally expresses fatigue, as if he has finally come to the end of his rope in keeping up his lifestyle of bedding girls and stealing cars.

Only in this first-ever theatrical encounter with Breathless, though, did I truly feel the sheer freedom of Godard's seemingly improvisatory style—as jazz-like as Martial Solal's score—and understand how intricately that freedom corresponds with that of its characters. The film may be celebrated these days for its game-changing cinematic innovations, but those jump cuts and frequent digressions don't exist in the film simply for their own sake. In Breathless, the technique is put to genuinely expressive ends, encoding Michel's high-flying amoral lifestyle into the film's DNA while maintaining a palpable distance from the character. And when, thanks to Patricia, Michel finally sees the end in store for him, the film likewise finally slows down, with Godard's use of Mozart's Clarinet Concerto infusing his moment of realization with a powerfully mournful feeling I don't think I've ever experienced with its ending before.

For me, what excites me most about Breathless beyond its still-startling technical innovations and its exultant celebration/deconstruction of American crime-genre conventions is how all of it advances a particular worldview, one of genuine intellectual and emotional curiosity about what makes his pair of young characters tick. This film is one cool cat...but, like the best American genre films, it frequently goes beyond its surface coolness to penetrate the essences of its two main characters: one seemingly without a care in the world except, perhaps, what he grasps in the movies (thus his lip-touching mannerisms and his self-conscious emulations of Humphrey Bogart); the other more worldly and concerned with her own future. In its own jazzed-up way, it's a character study—and while that certainly isn't the only way to approach this eternally fresh and endlessly fascinating classic, I submit that it's on that level that Breathless will endure the most. Certainly for another 50 years. 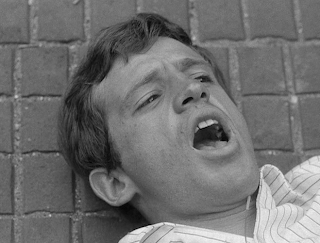 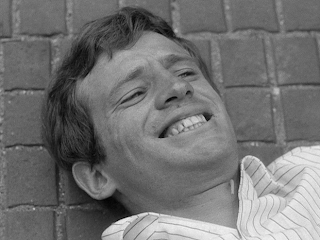 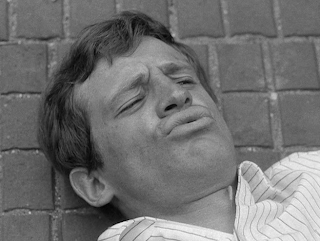 ***
I saw a couple of other films in the theater this weekend, both of them worthy and interesting efforts. 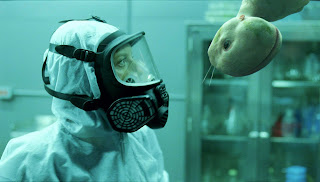 For its first two acts, Vincenzo Natali's Splice (2009) works intriguingly as a domestic drama with chilling sci-fi elements, focusing as it does on Elsa and Clive, a scientist couple (Sarah Polley and Adrien Brody) who secretly decide to go forward with an experiment to blend human and animal DNA to create a new organism. Or is it merely scientific curiosity that drives Elsa? The script, by Natali, Antoinette Terry Bryant and Doug Taylor, drops tantalizing hints that Elsa has come from a troubled childhood, and that her memories of that childhood may be driving an unspoken desire to give birth to a child of her own, however bastardized. Potent questions of bioethics also haunt a good deal of Splice: how far this couple should go in its experimentation, or whether they already went too far in even conceiving of such an experiment. So far, so ambitious and intelligent.

And then comes its third act—and your reaction to what transpires in its last half hour or so will depend almost entirely on one's willingness to accept its increasingly outlandish twists at face value, or whether to laugh in disbelief and dismiss it all as "near-campy bullshit," as a friend of mine did. Or can it be possible to do both, like I did? I wouldn't dream of spoiling any of those surprises for you; all I'll say, though, is that, to my mind, none of what happens in its third act comes out of nowhere. It all arises organically from themes and plot points in the film; it's just skewed in a more outrageous tenor than what has come before. The fact that I admittedly laughed at some of its outrageousness doesn't necessarily mean I found it difficult to take seriously.

Splice may not totally cohere in the end, but it's still worth seeing for the questions it raises, some brilliantly freaky imagery and a pair of fine lead performances that lend emotional gravity to the film even at its most over-the-top. 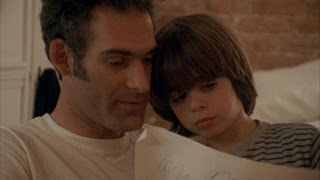 The other film I saw theatrically this weekend was Daddy Longlegs (2009), a low-budget independent film from New York filmmaking brothers Josh & Benny Safdie. Based on their experiences growing up with their own father, the film focuses on Lenny (Ronald Bronstein), a free-spirited 34-year-old divorcée as he tries to bond with his two sons (Sage and Frey Ranaldo) during the two weeks he has them away from his wife.
Lenny is one hell of an interesting case. From taking a random trip with his kids to upstate New York with a woman, and her boyfriend, he barely knows; to drugging his kids when he is forced to work a late shift as a movie-theater projectionist, with near-disastrous results; to getting himself thrown into the slammer when he's caught tagging during a late night out on the town with a couple of male buddies: Here is a man who acts like he is a slave to his child-like, self-centered and stubborn whims. That child-like quality, though, paradoxically makes the character, for all the problematic behavior he displays in the film, strangely magnetic. As Bronstein plays him, he exudes a strangely charming openness to life, a sense of genuine wonder amidst the grungy environment in which he lives (skillfully captured in 16mm by Brett Jutkiewicz and Josh Safdie); at its best, the film itself exudes a similarly warm feeling, sometimes whimsically zeroing in on side characters—a homeless beggar here, a Chinese-restaurant owner there—unimportant to the story but simply there to provide lively textures to Lenny's world that even Lenny himself is too self-absorbed to perceive.
It's this tension between delving into Lenny's head and stepping outside of it to offer us a sense of perspective that gives Daddy Longlegs its most fascinating quality; unlike Greenberg, Noah Baumbach's similarly discomfiting study of an adult fuck-up, the Safdies feel no need to stick so steadfastly outside their main character's point-of-view; they even going so far as to throw in a dream sequence featuring Lenny getting sucked dry by a giant mosquito. But when Daddy Longlegs finally does spend a sustained period of time outside of Lenny's vantage point in the film's concluding 15 minutes, the effect is quietly devastating: We begin to see him from the two sons' perspective after those two weeks with their father have passed into history, and suddenly he doesn't seem quite so likably loopy anymore, just abrasively so.
This oddly warm and wise movie looks to possibly be nearing its run at the IFC Center, but it may still be available on demand even after it leaves the theater. If you like to be as adventurous in your movie-watching as Lenny is in his life-living—without the adverse consequences—check this one out, by all means.
***
Thus, another weekend of movie-watching comes to an end—and a pretty fruitful one, all in all. I haven't even gotten around to my big DVD discovery of the weekend! What is it, you may be wondering? You'll just have to check in here later in the week and find out, won'tcha?