EAST BRUNSWICK, N.J.—Here is a list of the films I saw this weekend, in the order I saw them:

I technically went to see a fifth film in a theater, the Sundance Grand Jury Prize-winning Afghan-war documentary Restrepo (2010)...but I saw it on Saturday morning on two paltry hours of sleep after celebrating a friend's 25th birthday the night before at a beer garden in Astoria. About five minutes into the film, I felt my eyes getting heavy, and approximately 10 minutes later, I pretty much gave up fighting to stay awake, drifting in and out of consciousness during its 93-minute duration. So obviously, even though I paid my whopping-$13 general-admission ticket at Angelika Film Center to sit in a theater showing Restrepo, I can't say I actually saw it.

And I had hoped to finally see the highly touted Greek film Dogtooth (2009) sometime this weekend, but, as ever with arrangements involving more than one person, plans shifted and eventually got nixed entirely.

As you can tell, then, this was a bit of an odd weekend in moviegoing for me...but hey, I saw a handful of good-to-great films in theaters, and in between them all, I was able to work on those precious social skills in the company of good friends and intriguing strangers. All of this was done in two straight days in New York...and these days, the more time I spend in New York, and thus away from that increasingly embittered mental battlefield that is home, the better.


***
Though I took in four films this weekend, in this post I'm only going to get around to one of those four. The Rivette film is starting a run at IFC Center on July 9, so I plan to say a few words about that film then. Meanwhile, the two Anthony Mann films are part of a retrospective of the director's work that started Friday and runs for the next three weeks at Film Forum; I thought it might be more fun to round up all the films I get around to seeing during the series and offer up an Andrew Sarris-style summation of the director based on those films. 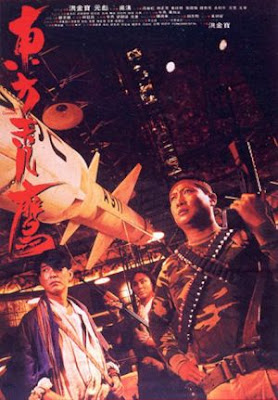 That leaves Eastern Condors, a 1987 action epic directed by and starring Sammo Hung, a legend of Hong Kong cinema in the 1980s and beyond (he's still fairly active today)...and, even now, I'm finding that I don't really have much to say about the film other than that I had an absolute blast at every single madly inventive, stunt- and action-packed, over-the-top, unabashedly shallow minute of this film, with its kinetic pleasures amplified by seeing it on a newly discovered (if far from pristine) 35mm print with an enthusiastic crowd at Lincoln Center's Walter Reade Theater as part of this year's New York Asian Film Festival (its ninth year).

This mix of The Dirty Dozen (1967) and Rambo: First Blood Part II (1985) is set in 1976 in the aftermath of the Vietnam War, but it is as interested in adhering to historical record as Quentin Tarantino was for World War II in Inglourious Basterds (2009)—in other words, not at all. There's barely a storyline to speak of; it has something to do with two commando groups and a trio of Cambodian female guerrilla fighters navigating through a still-treacherous Vietnam in order to blow up the nation's nuclear arsenal. And don't look for much in the way of political or moral complexity; this is a comic-book adventure through and through.

Really, it's all just a clothesline for Sammo Hung to pelt us with spectacle—the glorious spectacle of all manner of whacked-out action scenes and stunts featuring hilariously skewed characters. And as such, it's the kind of film that's difficult to write a whole lot about. It just has to be seen to be believed.

So, for a taste, watch this clip:

When he reviewed the first Lethal Weapon film in 1987, Roger Ebert wrote:

In a sense, a movie like "Lethal Weapon" isn't about violence at all. It's about movement and timing, the choreography of bodies and weapons in time and space. In lesser movies, people stand there and shoot at each other and we're bored. In a movie with the energy of this one, we're exhilarated by the sheer freedom of movement; the violence becomes surrealistic and less important than the movie's underlying energy level.

That's a pretty apt summarization of the pleasures of Eastern Condors; you either go along with its ecstatic mayhem or you dismiss it all as adolescent stupidity. (How adolescent? The film even features sadistic young Vietnamese kids playing Russian roulette á la The Deer Hunter (1978)—young kids!) As someone who enjoys indulging in his adolescent whims every once in a while—as well as someone who is pretty much a sucker for Hong Kong cinema of this vintage (seriously, there's something about the Cantonese dialect that I find endlessly captivating, even though I neither speak barely a word of it nor understand it)—I savored this from beginning to end. Yeah, it's pretty silly and mindless...but it's also oh so awesome!

(The 20th Century Fox Region 1 DVD of Eastern Condors released in 2003 is out of print, but you can find reasonably priced used copies online. Or you can go to Yesasia.com and find a Region 3 DVD there, if you have a region-free player.)

P.S. Guess who made an appearance after the screening of Eastern Condors?

That guy standing on the far right is indeed Sammo Hung himself, still with a lot of youthful energy, it seems, at 58...though perhaps not quite as much as the guy sitting on the far left, film critic and New York Asian Film Festival co-programmer Grady Hendrix, whom I had never actually seen in person but who rushed onto the stage before the screening and introduced it in the declamatory manner of, say, Peter Ustinov's circus master in Lola Montès (1955) trying to build anticipation for seeing a spectacular feat of acrobatics. In this case, it sure as hell worked. Forget Hung (Eastern Condors is my first Hung film, actually); Hendrix himself seems like a potentially electrifying interview subject!
Posted by Kenji Fujishima at 6/28/2010 12:01:00 AM

As I have become the recipient of the Versatile Blogger Award, I'm now passing that honor onto you. I know, since you are one of my contributors (albeit only once so far) it's somewhat incestuous, but I picked you anyway in hopes it would encourage you to do more for me. :-)

Oh thanks Ed! I have not forgotten you and your blog, honest!