Psycho at 50: My Tribute (Written Four Years Ago) 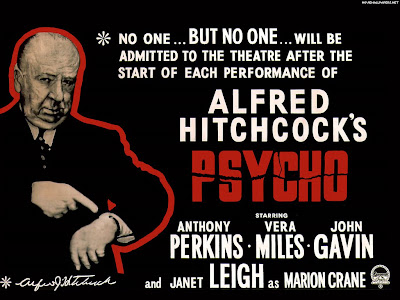 Today, cinephiles all over the world—or, at least, all over the blogosphere, which has become a major part of my world—celebrated the 50th anniversary of the release of Alfred Hitchcock's 1960 horror classic Psycho.

In the course of reading some of the tributes to the film—among them Gary Susman's for the Inside Movies blog at Moviefone; Ali Arikan's appreciation at Edward Copeland on Film; a reprint of Andrew Sarris's original 1960 review, his first at The Village Voice; and even Kim Morgan's fresh take on Gus Van Sant's 1998 shot-by-shot color remake—I suddenly remembered that I myself had written a brief appreciation for this groundbreaking work for a local newspaper, The Home News Tribune, about four years ago when the film played during a series at the Brooklyn Academy of Music. And then I thought it might be fun to republish it here at My Life, at 24 Frames Per Second, since there's no longer a link to it available.

Here then, complete and unedited, is my tribute to Psycho...written four years ago:

“We all go a little mad sometimes.”

That memorable saying is uttered by Norman Bates, one of the major characters of Alfred Hitchcock’s 1960 horror classic Psycho, which will be screened tomorrow over at the Brooklyn Academy of Music as part of a series entitled “Bad Guys, Badasses, and Other Mean Spirits: Great Villains in Cinema.”

Norman Bates is indeed one of the most fascinatingly morbid of movie characters, but calling him a “villain” doesn’t quite do him justice. To me, the word “villain” suggests a one-note snarling bad guy, one who is easy to hate. Psycho is much richer than that because it understands the villainy lurking inside even the most unassuming of people—and not just in Norman.

Norman Bates, obviously, is the one most people remember from the film, and with good reason. You know how it’s often said about some killers on the news that “he always seemed like a nice person” to neighbors? Norman is one of those people. Sure, he has his quirks: taking up bird-stuffing as a hobby, being a little too attached to his mother. Otherwise, though, Norman—smoothly played by Anthony Perkins in his career role—seems mostly harmless. Listening to him talk so candidly to Marion Crane (Janet Leigh), one would probably only conclude that he was a weird and sheltered but basically agreeable fellow…and certainly not one capable of murder.

But murder he does—although Hitchcock and screenwriter Joseph Stefano do not reveal this until the end of the picture, in which we find out that he, not his mother, killed Marion Crane in the shower (in the film’s most famous setpiece, the so-called “shower scene”).

Psycho isn’t entirely about Norman, however; in fact, he doesn’t even appear until after the first 40 minutes or so. The focus of the first section of the film is on badness of a different, less obviously horrific sort: Marion’s attempt to flee Phoenix, Arizona with a large sum of money that she steals from a rich client of her employer’s. As she basically fumbles about in her attempts to conceal the money, escape the watchful eyes of a cop on her tail, and avoid looking too suspicious in the eyes of a used-car salesman, we hear voiceover dialogues: her ideas about what people must be saying back home about her act of theft. Expressions of her guilt, in other words—a guilt that is uncannily mirrored in the film’s second half, as Norman tries to cover his guilt in a similarly fumbling manner.

In many ways, Psycho is not just a highly effective horror thriller. At heart, it is a disturbing, uncompromising look the madmen in all of us, murderous or not. In film after film, Alfred Hitchcock explored the psychologies of morally compromised characters: people who spy on others out of boredom (Rear Window), people who ruthlessly try to remake others in their own image (Vertigo), or, in Psycho, people who act irrationally out of frustration. Marion steals the money because she’s frustrated that she has to keep her relationship with Sam (John Gavin) a secret; Norman, we eventually discover through the psychologist at the end of the film, kills Marion in the motel shower, dressed as a woman, as a result of an unstated sexual attraction to Marion.

The discomforting power of Psycho comes from the fact that Hitchcock doesn’t turn these characters into evil cardboard cutouts. He doesn’t exactly love them, but he shows a kind of detached sympathy for them and their questionable actions. Maybe that’s what has really creeped us out about Norman Bates through all these years: at times, we can almost feel for this murderer, can almost understand the fear and guilt that leads him to kill. As a fictional character, he’s almost frighteningly plausible. That’s real horror.